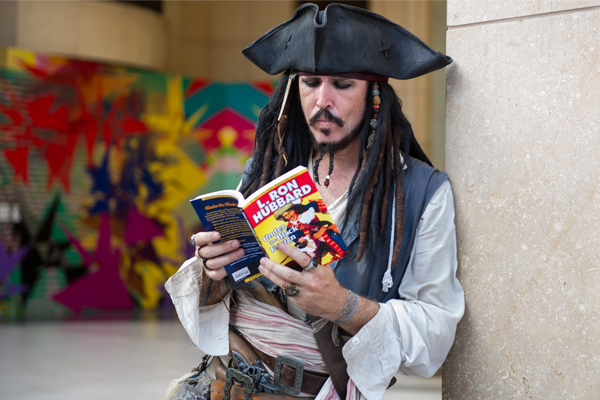 Saturday, September 19th, is International Talk Like A Pirate Day.

The height of the pirate culture, often referred to as the Golden Age of Piracy, was from the 1650s to the 1730s. Probably one of the most famous pirates was Blackbeard (born Edward Teach), an English pirate who sailed the Atlantic and Caribbean aboard the Queen Anne’s Revenge, a ship captured from the French. He was so named for his large black beard into which he inserted lit matches during battle to strike fear into the hearts of his enemy who sometimes surrendered without a fight.

If you are rusty with your pirate talk, here are a few common phrases to get you started. These phrases and definitions are from the Pirate Glossary which is a great resource for pirate talk.

Blimey – An exclamation of surprise.

Heave to – An interjection meaning to come to a halt.

Landlubber – a person unfamiliar with the sea or seamanhip. The term doesn’t derive from “land lover,” but rather from the root of lubber, meaning clumsy or uncoordinated. Thus, a landlubber is one who is awkward at sea for familiarity with the land. The term is used to insult the abilities of one at sea.

Matey – a practical way to address someone in a cheerful, if not necessarily friendly, fashion.

Sail ho! – An exclamation meaning another ship is in view. The sail, of course, is the first part of a ship visible over the horizon.

Scupper that! – An expression of anger or derision meaning “Throw that overboard!”

Sink me! – An expression of surprise.

If you want to sound like you’ve been a pirate all your life, visit The Official Talk Like a Pirate Day site which has links to many more resources. There is also a site that provides English-to-Pirate translations, thanks for Tim Moses who developed the translator.

Avast, whatever you might be doin’ on Talk Like a Pirate Day, be sure t’ study up on yer talk so you can impress your buckos. Arrr!

Pirate food for your Talk Like a Pirate Day event

The Code of a Pirate
Scroll to top