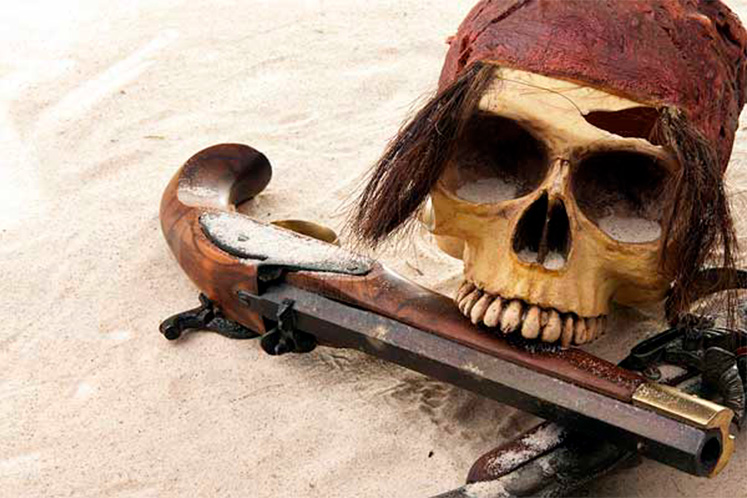 Arr! Saturday, September 19th is Talk Like a Pirate Day. In order to talk like a pirate it would be helpful to understand more about a pirate’s life. For example, how did one become a pirate?

Well, very simply, one signed on and agreed to the pirate’s code or Articles of Agreement. These codes varied, but covered things such as discipline, the division of stolen goods, compensation for injuries and the like.

Surprisingly, these codes are far from cruel and savage, as many pirates are portrayed, and provide a better insight into a pirate’s life.

The Articles of Agreement

I. Each pirate to have a voice in the affairs of the moment.

II. Every man to be called fairly by name and list in the doling out of prize shares. Every man allowed a suit of clothes from the prize. Marooning was the penalty for holding out so much as a dollar from the general fund.

III. No person to game at cards or dice for money.

IV. Lights to be put out at eight o’clock at night.

V. Pirates to keep their cutlass, piece and pistols clean and fit for service.

VI. No women to be allowed among them. And if any were captured, any man approaching her was to be executed.

VII. To desert ship in battle was punished by death.

VIII. No quarreling of any kind aboard ship. Differences to be settled on the beach, properly supervised by quartermaster or captain. If combatants miss with pistols, they are to take cutlasses. Winner is the one who draws first blood.

IX. If any man shall lose a limb or become crippled, he shall be compensated to the extent of eight hundred dollars out of the public stocks. Lesser injuries in proportion.

While pirates were notorious for their lawlessness and brutality, their Articles of Agreement set them apart from other naval and governmental institutions of the day because they incorporated principles of democracy.

To learn more about pirates, some excellent books to read would be any one of the follow: Pirates Latitude by Michael Crichton, On Stranger Tides by Tim Powers or Under the Black Ensign by L. Ron Hubbard.