Canadian Mountie Tommy McKenna sets off on the trail of a brutal madman and his pack of bloodthirsty wolves across the frozen wilderness of the Yukon. But first he must contend with the exotic and deceptive young woman, Kaja.

There are all kinds of crazy, but there’s only one Yukon Madness. And Royal Mountie Tommy McKenna has seen first-hand the terror that follows in its wake … his partner murdered and fed to a pack of wolves.

But that’s only a taste of the horrors to come. Bent on revenge, McKenna sets out to find the madman himself—a monster who goes by the name Itauk. He quickly finds, however, that there’s only one way to get to the beast—through the man’s raven-haired beauty of a girlfriend, Raja.

But whose side is Raja on? Can McKenna win her over? Or will he too end up dead meat? The bait has been cast, the scent has been taken, and the trap has been set. The only question is, who is the predator and who is the prey?

Also includes the adventures “The Cossack,” which takes place in revolutionary Russia and explores the high price one man pays for refusing to kiss a Duchess; and “The Small Boss of Nunaloha,” the exotic story of a man who may be short, but who stands tall when it comes to defending his turf—an island in the Pacific. 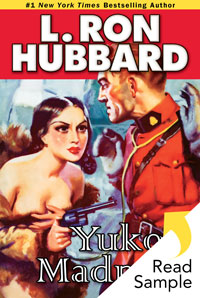 L. Ron Hubbard never wrote a word, conceived a character, or described a setting without first finding out all he could about the people and places that drove his stories. He wrote: “I began to search for research on the theory that if I could get a glimmering of anything lying beyond a certain horizon, I could go deep enough to find an excellent story. I began to read exhaustively. I wanted information and nothing else.” His exhaustive research—and search for the excellent story comes through in this book three times over.

Banda Sea: the sea of the south Moluccas (a group of about one hundred and fifty islands) in Indonesia, technically part of the Pacific Ocean but separated from it by the islands.

blackbirded: engaged in the slave trade, especially in the Pacific.

“Boots and Saddles”: a bugle call alerting cavalrymen to put on their riding boots and saddle their horses. There are many different bugle calls, each with its own meaning and essential to all military communication. The enlisted soldier’s life was regulated by them. The primary bugler was assigned to the headquarters staff and kept close to the commander at the front.

Cossack: a member of a people of Southern European Russia and adjacent parts of Asia, noted as cavalrymen, especially during tzarist times.

curb bits: bits used to control a horse’s action by means of pressure on the reins. A curb bit consists of the actual bit with a chain or strap attached, passed under the horse’s jaw.

fo’c’s’le: in merchant vessels, the forward part of the vessel, under the deck, where the sailors live.

Haviland: Haviland & Co, established in 1842 in Limoges, France. The company is known for its fine china with hand-painted and custom designs.

Hudson Bay: a large inland sea in the northeast of Canada. On the east it is connected with the Atlantic Ocean and on the north with the Arctic Ocean.

hummock: a ridge or hill of ice in an ice field.

igdlu or igdlut: (Eskimo) igloo or igloos; an Eskimo house, usually made of sod, wood or stone when permanent, or of snow and skin when temporary.

jib: small foremost sail; a small triangular sail in front of the main or only mast on a sailing ship or sailboat.

kamik: (Eskimo) a knee-high waterproof boot with a hard sole, made of sealskin.

Lazarus: a man whom Jesus raised from the dead.

Lee-Enfield: a standard bolt-action magazine-fed repeating rifle; the British Army’s standard rifle for over sixty years from 1895 until 1956, although it remained in British service well into the early 1960s and is still found in service in the armed forces of some Commonwealth nations.

longboat: a large boat that may be launched from a sailing ship.

Melanesians: people native to a division of Oceania in the southwest Pacific Ocean, comprising the islands northeast of Australia and south of the equator. It includes the Solomon Islands. The Melanesian people primarily fish and farm, and supplement their economy by exporting cacao, copra (coconut) and copper.

rudder: a broad, flat, movable piece of wood or metal hinged vertically at the stern of a boat or ship, used for steering.

Russia’s Revolution: the rebellion in Russia in 1917 that occurred in two stages, the first leading to the overthrow of the tzarist government and establishment of a provisional government (March 1917) and the second, replacing this government with the Soviet government led by Lenin (November 1917) that led to a period of civil war that ended in 1922.

saber chain: a chain on an officer’s uniform, worn on the left side at waist level, to which the scabbard is attached.

senhor: (Portuguese) a title of courtesy equivalent to Mr. or sir.

Yukon Territory: the westernmost of Canada’s three territories, it is positioned in the northwest corner, bordering Alaska. Yukon is known as “the land of the midnight sun” because for three months in summer, sunlight is almost continuous. In winter, however, darkness sets in and the light of day is not seen for a quarter of the year.