An American in the French Foreign Legion is caught in the middle of an ancient feud between two tribes in the Moroccan city of Harj. When a gorgeous woman finds herself drawn dangerously into the midst of the conflict, the Lieutenant does what any man must—he saves her … igniting a war.

He’s a handsome American Lieutenant in the French Foreign Legion. She’s a beautiful woman who’s as fiery as the North African sun … and as mysterious as the far side of the moon. And she’s all his—bought and paid for in the village square. Put them together and you’re sure to get fireworks.

The only reason the Lieutenant bought her was to free her from the slave trade. But now that he’s got her, he’s got trouble. Two violent native tribes are determined to get their hands on the woman … even if it means unleashing an all-out war.

The warriors lay siege to the outpost—3,000 of them versus 60 Legionnaires within. Can the Lieutenant hold the fort against the onslaught? And how long can he fend off the powerful feelings he has for the woman in his care? And, finally, does he have any idea of the secret in her past that could change everything? 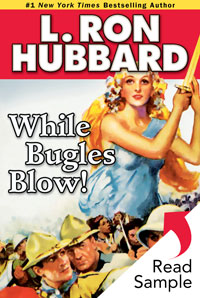 On the subject of North Africa, L. Ron Hubbard said that writers too often “forget a great deal of the languorous quality which made The Arabian Nights so pleasing. Jewels, beautiful women, towering cities filled with mysterious shadows, sultans equally handy with robes of honor and the beheading sword.” Mr. Hubbard brings this unique insight to his stories of North Africa and the Legionnaires, investing them with an authenticity of time, place and character that will keep you asking for more.

allez-vous-en: (French) be off with you.

Annamite: of Annam, a historic region of southeast Asia, comprising most of central Vietnam. The name Annam, meaning “pacified south,” comes from an ancient Chinese name for Vietnam. France revived the term in the nineteenth century to designate central Vietnam. In the 1880s France established a protectorate over the region. Annam, along with Cochin China in southern Vietnam, Tonkin in northern Vietnam and eventually Laos and Cambodia, was part of the French-ruled Indochinese Union, popularly called French Indochina. During World War II, Japan expelled France from occupying Vietnam.

Atlas: Atlas Mountains; a mountain range in northwest Africa extending about fifteen hundred miles through Morocco, Algeria and Tunisia, including the Rock of Gibraltar. The Atlas range separates the Mediterranean and Atlantic coastlines from the Sahara Desert.

barb: a breed of horses introduced by the Moors (Muslim people of mixed Berber and Arab descent) that resemble Arabian horses and are known for their speed and endurance.

billet: to provide lodging for; quarter.

cap and bells: a cap with bells on it, once worn by jesters. Made of cloth, the cap was floppy with three points, each of which had a jingle bell at the end. The three points of the cap represent the ears and tail of an ass.

hobnail: a short nail with a thick head used to increase the durability of a boot sole.

Hotchkiss: a heavy machine gun designed and manufactured by the Hotchkiss Company in France from the late 1920s until World War II where it saw service with various nations’ forces, including France and Japan, where the gun was built under license. The machine gun is named for Benjamin B. Hotchkiss (1826–1885), one of the leading American weapons engineers of his day, who established the company in 1867.

houris: in Muslim belief, any of the dark-eyed virgins of perfect beauty believed to live with the blessed in Paradise.

kohl: a cosmetic preparation used especially in the Middle East to darken the rims of the eyelids.

Legion: French Foreign Legion, a specialized military unit of the French Army, consisting of volunteers of all nationalities assigned to military operations and duties outside France.

Legionnaires: members of the French Foreign Legion, a unique elite unit within the French Army established in 1831. It was created as a unit for foreign volunteers and was primarily used to protect and expand the French colonial empire during the nineteenth century, but has also taken part in all of France’s wars with other European powers. It is known to be an elite military unit whose training focuses not only on traditional military skills, but also on the building of a strong esprit de corps amongst members. As its men come from different countries with different cultures, this is a widely accepted solution to strengthen them enough to work as a team. Training is often not only physically hard with brutal training methods, but also extremely stressful with high rates of desertion.

Mauser: a bolt-action rifle made by Mauser, a German arms manufacturer. These rifles have been made since the 1870s.

pig’s bladder: a pig’s bladder blown up like a balloon and hung on the end of a stick. It was part of a jester’s costume and was used as a scepter, a mock symbol of office.

postern: postern gate; small secondary entrance, sometimes concealed, and usually at the rear of a castle or fortress, used as a means to come and go without being seen or as a route of escape.

Rif: Er Rif; a hilly region along the coast of northern Morocco.

Riff: a member of any of several Berber peoples inhabiting the Er Rif. The Berber people of the area remained fiercely independent until they were subdued by French and Spanish forces (1925–1926).

sentry go: guard duty; the duty of serving as a sentry.

under the hammer: for sale at public auction.