Coast Guard Officer Johnny Trescott is caught in a deadly sea adventure when a drug runner captures his ship, and uses it and Johnny’s uniform to raid ships and traffic drugs. When authorities arrest Johnny and throw him in jail, he must escape and bring the cutthroat to justice—or face the gallows himself.

Coast Guard Chief Petty Officer Johnny Trescott is as smart, tough, and fearless as they come. But he’s about to lose everything—his boat, his freedom, and his identity. Johnny’s mission is to track down drug runners in the Gulf of Mexico, and he’s got his eye on the biggest fish of all—Georges Coquelin. But an SOS from a downed plane that’s sinking fast leads him straight to disaster.…

Coquelin springs a trap. Stranding Johnny and the plane’s passengers on a deserted island, the drug smuggler commandeers Johnny’s boat and his name. In the company of a weak-kneed millionaire and a long-legged beauty, Johnny’s at the end of his rope—which could turn into a noose around his neck. He’s got nothing left to lose … and there’s nothing he won’t do to reclaim his reputation.

“Nonstop action and a hero to root for.” —Publishers Weekly 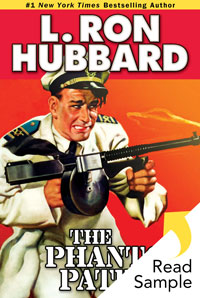 The Phantom Patrol marked a turning point in L. Ron Hubbard’s fiction. In writing this story he recognized the vital importance of research and realism. To that end, Mr. Hubbard toured Coast Guard vessels and interviewed officers who were actually involved in chasing down drug smugglers. The resulting authenticity and success of the tale were a sign of things to come. Read The Phantom Patrol and experience the development of a unique voice in storytelling.

abeam: off to the side of a ship, especially at a right angle to the middle of the ship’s length.

after hatch: an opening in a boat’s deck, toward the stern, which is fitted with a watertight cover.

anchorage: that portion of a harbor, or area outside a harbor, suitable for anchoring, or in which ships are permitted to anchor.

anvil chorus: in reference to a piece of music, “The Troubadour,” by Italian composer Giuseppe Verdi (1813–1901), that depicts Spanish gypsies striking their anvils at dawn and singing the praises of hard work, good wine and their gypsy women.

barratry: fraud by a master or crew at the expense of the owners of the ship or its cargo.

Borneo: the third largest island in the world, located in southeastern Asia, in the western Pacific Ocean to the north of the Java Sea.

bulwark: a solid wall enclosing the perimeter of a weather or main deck for the protection of persons or objects on deck.

Cajun: a Louisianan descended from French-speaking immigrants from Acadia, a former French colony in Canada.

cameo: a small piece of sculpture on a stone or shell having two layers of different colors, the figure being cut in relief in one layer, and another serving as background.

chronometer: an instrument for measuring time accurately in spite of motion or varying conditions.

collar ad: collar and shirt advertisements by J. C. Leyendecker (1874–1951), an illustrator and entrepreneur who defined an era of fashion in the early twentieth century. He painted strong, athletic men and created long-running characters for the Arrow collar man ads (Arrow was a brand of shirt), as well as many others.

Cyclops: USS Cyclops (1910–1918), a Navy ship that was specially designed to keep a mobile battle fleet supplied with fuel and carried coal to facilitate the US Navy’s wartime operations. In early March 1918, while returning from Brazil, the Cyclops disappeared with all hands. Her wreck has never been found and the cause of her loss remains unknown.

dead to rights: in the very act of committing a crime, offense or mistake; red-handed.

drop on, got the: to have a distinct advantage over someone, especially through early or quick action. From the mid-1800s it originally alluded to pointing one’s gun at someone before he pointed his at you.

Errol Island: formerly one of the Chandeleur Islands, a chain of islands located east of New Orleans in the Gulf of Mexico. By 1951, Errol Island was completely submerged and it no longer exists.

foil: a light, slender sword with a blunted point, used in the art or practice of fencing.

hawse pipes: iron or steel pipes in the stem or bow of a vessel, through which anchor cables pass.

hull: to pierce the hull of a ship, especially below the water line.

hydrographic map: a nautical map showing depths of water, nature of bottom, contours of bottom and coastline, and tides and currents in a given sea or sea and land area.

Jacob’s ladder: a hanging ladder having ropes or chains supporting wooden or metal rungs or steps.

knot: a unit of speed, equal to one nautical mile, or about 1.15 miles, per hour.

lay to: 1. turn into the wind to stop or gain control in heavy weather. A power vessel would turn into the seas and apply just enough power to maintain position. 2. to attack vigorously.

lockjaw: a nervous system disease brought on by bacteria that cause muscles to seize up and may cause death by suffocation.

navy: a body or fleet of ships with their crews.

one-pound gun or one-pounder: a gun firing a one-pound shot or shell. It looks somewhat like a miniature cannon.

plugged centavo: a worthless coin. A plugged coin was counterfeit or had a plug of metal removed from the center. Centavo is Spanish for a cent or penny.

rigger: a mechanic skilled in the assembly, adjustment and alignment of aircraft control surfaces, wings and the like.

rummies: rumrunners; people or ships engaged in bringing prohibited liquor ashore or across a border.

scuppers: gutters along the edge of the deck that drain into openings in the side of a ship that allow water to run off.

ship a sea: when the sea breaks into the ship and is received on board.

spars: strong poles, especially those used as masts to support the sails on ships.

tin can: 1. a ship’s engines. 2. a destroyer; a small fast warship. The nickname arose because in World Wars I and II, the hull plating of this type of ship was so thin the sailors claimed they were made from tin cans. In fact, a .45-caliber pistol bullet would penetrate it. Modern destroyers have much thicker hull plating, but the nickname persists.

wherry: a light rowboat for use transporting goods and passengers in inland waters and harbors.