Eddie Moran is a fugitive on the run from the French Foreign Legion. When he saves the life of a deposed Berber ruler, Eddie finds himself in the middle of a war captured by the Black Sultan, usurper of the Berber’s throne.

Meet Eddie Moran, a slightly disreputable American cooling his heels in French Morocco. He’s as smooth as they come, one step ahead of the game … and of the police.

Who’s after him? Just about everybody. What’s he done? A bit of everything—smuggler, revolutionary, whatever crooked little scheme will pay for his next meal or next drink. But Eddie’s latest caper is one he may not be able to escape … even if he wants to.

Stumbling into a fight between a couple of Berber chieftains, Eddie lands in a prison run by The Black Sultan. He may be a captive of the Sultan, but he’s captivated by a stunning young woman the Sultan means to add to his harem. For her, Eddie might just go straight—if he can get them out of this hellhole alive.

Also includes the adventure story, “Escape for Three,” in which a bold trio of French Legionnaires come to the rescue of their great leader—only to decide he may not be so great after all. 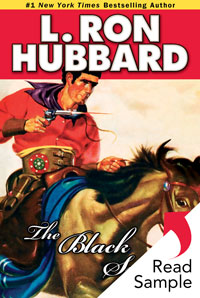 When The Black Sultan was originally published, L. Ron Hubbard said that writers too often “forget a great deal of the languorous quality which made The Arabian Nights so pleasing. Jewels, beautiful women, towering cities filled with mysterious shadows, sultans equally handy with robes of honor and the beheading sword. These things still exist, undimmed, losing no luster to the permeating Occidental flavor which reaches even the far corners of the earth today.” Hubbard brings this unique insight to his stories of North Africa and the Legionnaires, investing them with an authenticity of time, place and character that kept his readers asking for more.

Annamite: of Annam, a French protectorate encompassing the central region of Vietnam. The region was seized by the French and became part of French Indochina in 1887. It regained its independence in1945.

AVB rifle grenade: anti-personnel VB (for Viven-Bessières, the French company that made it) rifle grenade; a form of grenade that utilizes a rifle as a launch mechanism to increase the effective range of the grenade.

Browning: a .30- or .50-caliber automatic belt-fed, air-cooled or water-cooled machine gun capable of firing ammunition at a rate of more than 500 rounds per minute.

cacolet: (French) a horse or mule litter for the transport of wounded.

cacos: (French) loosely knit bandit organizations who hired out to the highest bidder. The transfer of power in Haiti traditionally occurred when a political contender raised a caco army and marched on the capital. The transfer was completed when the incumbent fled the country with part of the treasury.

Cap-Haïtien: a main city on the north coast of Haiti facing the Atlantic Ocean.

cop: to steal something, especially by snatching it hurriedly.

corrugated ellipsoid: an oval shape with parallel and alternating ridges and grooves; grenade.

dum-dum: a bullet with a soft front that increases in size when it hits its target, causing serious injuries.

French Foreign Legion: a unique elite unit within the French Army established in 1831. It was created as a unit for foreign volunteers and was primarily used to protect and expand the French colonial empire during the nineteenth century, but has also taken part in all of France’s wars with other European powers. It is known to be an elite military unit whose training focuses not only on traditional military skills, but also on the building of a strong esprit de corps amongst members. As its men come from different countries with different cultures, this is a widely accepted solution to strengthen them enough to work as a team. Training is often not only physically hard with brutal training methods, but also extremely stressful with high rates of desertion.

French Indochina: part of the French colonial empire in Indochina, a region in southeast Asia, east of India and south of China.

Gendarmerie d’Haiti: (French) police force of Haiti. Organized in 1916, and initially consisting of 250 officers and 2,500 men, their purpose was to provide police services throughout the country. The gendarmerie was officered by Marine Corps personnel, most of whom were sergeants with officer rank in the Haitian service. The gendarmerie fought alongside Marine occupying forces during the caco wars.

Haitian: of Haiti, country in the Caribbean occupying the western part of the island of Hispaniola. The other half is occupied by the Dominican Republic.

Hamitic: of or relating to the Hamites, African people of Caucasoid descent believed to be the original settlers of northern Africa from Asia.

Hotchkiss: a heavy machine gun designed and manufactured by the Hotchkiss Company in France from the late 1920s until World War II. The machine gun is named for Benjamin B. Hotchkiss (1826–1885), one of the leading American weapons engineers of his day, who established the company in 1867.

Imaziren: an indigenous people of Morocco who are Berbers and who call themselves Imaziren (free-men).

kasbah: a castle built on a high place to defend a North African city.

Mannlicher: a type of rifle equipped with a manually operated sliding bolt for loading cartridges as opposed to the more common rotating bolt of other rifles. Mannlicher rifles were considered reasonably strong and accurate.

Marabouts: spiritual leaders in the Islamic faith, especially in Africa. They are scholars of the Koran and many make amulets for good luck, preside at various ceremonies and in some cases actively guide the life of the follower.

Moorish: of the Moors, Muslim people of mixed Berber and Arab descent.

parapet: a wall, rampart or elevation of earth for covering soldiers from an enemy’s fire.

salāt: (Arabic) a ritual Muslim prayer made five times a day (dawn, midday, afternoon, evening and night) in a standing position, alternating with inclinations and prostrations, as the worshiper faces toward Mecca.

trick soldier: a soldier who, in the convention of military dress and duties, is conspicuously smart, attractive, effective or able.

Wagon-Lit: name of a hotel. Wagon-Lit means “sleeping car” in French. Sleeping compartments on trains were first introduced by Georges Nagelmackers in 1872 to service international railroad travelers on trains such as the Orient Express. The original company, Campaignie Internationale des Wagons-Lits, later expanded into hotels.

Webley: Webley and Scott handgun; an arms manufacturer based in England that produced handguns from 1834. Webley is famous for the revolvers and automatic pistols it supplied to the British Empire’s military from 1887 through both World War I and World War II.

wudu’: (Arabic) a Muslim cleansing ritual involving cleaning with water of the hands, face, mouth and feet (and perhaps other parts of the body), which is a symbol of spiritual cleansing. Usually practiced before salāt.

Zouave: a member of a French infantry unit, originally composed of Algerian recruits and characterized by colorful uniforms with baggy trousers.