Pilot Peter England’s humdrum airplane routine is unexpectedly disrupted when his company reassigns him to transport some special passengers. But when his aircraft gets attacked by a mysterious fighter plane, Peter realizes he’s transporting dangerous cargo—a princess seeking to turn the tide of a war!

Pilot Pete England used to think there was nothing more exciting in the world than flying off into the wild blue yonder. But lately, the blue yonder hasn’t been wild at all … it’s been downright dull. Pete’s hungry for adventure—and he’s about to get his fill.

Pete has fallen into a rut, flying the same route—New York to D.C.—with the same passengers, day after day after day. He might as well be driving a bus … until “her highness” climbs aboard. Apparently a princess, and for one flight, she’s bought up every ticket on the plane.

Once Pete gets her into the air, the action heats up fast. He learns that the lady is at the center of some international intrigue that could turn the tide of war … and now a mysterious plane is on their tail, bent on shooting them out of the sky. But that’s the least of Pete’s concerns. There’s more to this princess than meets the eye, and falling in love with her could turn out to be the greatest flight risk of all. 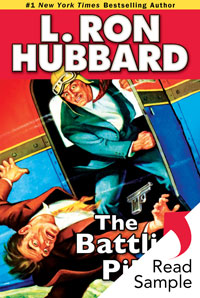 As a barnstorming pilot in the early days of aviation, L. Ron Hubbard was dubbed “Flash” Hubbard by the aviation magazines of the day. Expanding his knowledge, even more, he visited Boeing in Seattle where the president and chief engineer gave him an inside look at their test pilot program. His unique and pioneering insight of flight streaks across the page in novels like The Battling Pilot.

Alleghenies: Allegheny Mountains; a mountain range comprising the western part of the Appalachian Mountains. The range extends about 500 miles (805 km) from northern Pennsylvania to southwest Virginia.

Anacostia: a neighborhood located in the southeast area of Washington, DC. It is located east of the Anacostia River, which flows from Maryland into Washington, DC and joins the Potomac River. This area also contained a narrow plain along the river where the Navy’s Anacostia Naval Air Station and the Army’s Bolling Field resided originally established in 1917 and 1918.

Bolling: Bolling Field; established in 1918, and named in honor of the first high-ranking air service officer killed in World War I. The Army’s Bolling Field resided on east bank of the Anacostia River sharing an open plain with the Navy’s Anacostia Naval Air Station. Bolling served as a research and testing ground for new aviation equipment and its first mission provided aerial defense of the capital.

Bristol: two-seater fighter biplane of World War I, manufactured by the British and flown by the Royal Air Force until 1932.

Chiang: Chiang Kei-shek (1887–1975); served as leader of the Chinese Nationalist Party after the death of its founder in 1925. In 1927 civil war broke out between the Nationalist government and the Red Army led by Mao Tse-tung. In 1934, Chiang surrounded the Communists, but they broke out and began their Great Heroic Trek. In 1949 the Communists gained control of the Chinese mainland and Chiang retreated to Taiwan where he established a government in exile.

cowl: the removable metal housing of an aircraft engine, often designed as part of the airplane’s body, containing the cockpit, passenger seating and cargo but excluding the wings.

cowl gun: a gun installed inside the cowl (metal covering over the engine) of an airplane.

D of C or Department of Commerce: the department of the US federal government that promotes and administers domestic and foreign commerce. In 1926, Congress passed an Air Commerce Act that gave the US Department of commerce some regulation over air facilities, the authority to establish air traffic rules and the authority to issue licenses and certificates.

dihedral: the upward or downward inclination of an aircraft wing from true horizontal, which is a self-stabilizing feature in the wing design. As the plane rolls to one side, the lower part of the wing starts to get more lift and then brings itself back up.

fins: fixed vertical surfaces at the tail of an aircraft that give stability, and to which the rudders are attached.

ground loop: a sharp horizontal turn made by an aircraft on the ground when taxiing, landing or taking off.

lady-in-waiting: a lady who is in attendance upon a queen or princess.

Lewis: a gas-operated machine gun designed by US Army Colonel Isaac Newton Lewis in 1911. The gun weighed twenty-eight pounds, only about half as much as a typical medium machine gun. The lightness of the gun made it popular as an aircraft-mounted weapon, especially since the cooling effect of the high-speed air over the gun meant that the gun’s cooling mechanisms could be removed, making the weapon even lighter.

minstrel show end man: a man at each end of the line of performers in a minstrel show who engages in comic banter with the master of ceremonies. A minstrel show is a comic variety show presenting jokes, songs, dances and skits, usually by white actors in blackface.

office: cockpit of an aircraft.

Rolls: an aircraft engine built by Rolls-Royce, a British car and aero-engine manufacturing company founded in 1906.

rumrunners: people or ships engaged in bringing prohibited liquor ashore or across a border.

Shensi: a province of east central China; one of the earliest cultural and political centers of China and site of the conclusion of the Great Heroic Trek (also known as the Long March).

sideslip: (of an aircraft when excessively banked) to slide sideways, toward the center of the curve while in turning.

Split-S: one of the oldest air combat maneuvers used to disengage from combat. To execute a Split-S, the pilot rolls his aircraft inverted and then executes a half-loop, resulting in the aircraft flying level in the opposite direction.

Western Front: term used during World War I and II to describe the “contested armed frontier” (otherwise known as “the front”) between lands controlled by the Germans to the East and the Allies to the West in Europe. In World War I, both sides dug in along a meandering line of fortified trenches stretching from the coast of the North Sea, southward to the Swiss border that was the Western Front. This line remained essentially unchanged for most of the war. In 1918 the relentless advance of the Allied armies persuaded the German commanders that defeat was inevitable and the government was forced to request armistice.

Yellow River: the second longest river in China, flowing through the north central part of the country.