Mat Lawrence, the engineer son of a murdered gangster, enlists the help of his father’s fast-talking criminal attorney. Mat stalks after the murderers and a million dollars that have gone missing—a sure recipe for bullets, lies, and bedlam.

Imagine that your father is one of New York City’s top gangsters and that you want nothing to do with him or his criminal empire. Now imagine he’s been murdered … and the only person who gives a damn is you. Meet Mat Lawrence, a stand-up guy—who’s got one thing on his mind: revenge.

The last place Mat wants to go is back to New York, but that’s where the killers are, and he won’t stop until they’re dead … or he is. And there’s only one man who can help him track them down: his father’s criminal attorney—the Mouthpiece.

But there’s more than a desire for revenge at play in this deadly game. When Mat’s old man went down, a million dollars went missing. Put it all together—a cold-blooded murder and a cool million gone—and it’s a pretty good bet that the one thing Mat is sure to find is some serious heat.

Also includes the tales of mystery, “Flame City,” the story of one man’s harrowing attempt to save his father and the city from a serial arsonist; “Calling Squad Cars!,” in which a police dispatcher goes to extraordinary lengths to bring down a gang of bank robbers after he is accused of working with them; and “The Grease Spot,” the story of a former race car driver, now the owner of a wrecking company, who plays fast and loose with the police … and may have to pay for it. 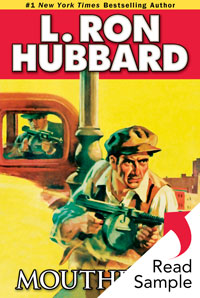 Mouthpiece was originally published in the September, 1934, edition of Thrilling Detective. That same year, as the youngest writer ever to serve as president of the New York Chapter of the American Fiction Guild, L. Ron Hubbard sought to promote greater accuracy in the writing of detective and mystery stories. To that end, he invited the coroner to speak to the Guild members over lunch. He later recounted that “they would go away from the luncheon the weirdest shade of green.” But, we can assume, they also went away better informed. Years later, expanding his studies in the area, Mr. Hubbard became a special officer with the Los Angeles Police Department.

apache: a gangster or thug. The term was first used in 1902 by a French journalist to describe Paris thieves who were known for their crimes of violence. Apaches were so called because their alleged savagery was compared with that attributed by Europeans to the Native American tribes of Apaches.

be hanged: used to express exasperation or disgust.

cowl: the top portion of the front part of an automobile body, supporting the windshield and dashboard.

degree rooms: third-degree rooms; interrogation rooms; rooms of mental or physical torture used to obtain information or a confession from a prisoner.

giddap: get up or go ahead.

haymaker: a powerful blow with the fist.

jig’s up, the: it’s all over; usually referring to a scam, trick or plot that has been found out and foiled before it could come to fruition.

Merthiolate: a trademark name for thimerosal, a cream-colored crystalline powder used as a local antiseptic for abrasions and minor cuts.

nickel barrel: siren, from the outside cylindrical part or casing of a siren that is nickel plated or colored.

petcock: a small valve used to control the flow of gas.

pile out: to move out.

pipe: cinch; someone or something that is easy and presents no problems.

pipe the dick: to look at, notice the detective.

powder, take a: to make a speedy departure; run away.

ride, take for a: to take out in a car intending to murder.

sand blotting box: a box with a perforated top containing fine sand for sprinkling on wet ink. After absorbing and drying the ink, the sand was poured back into the blotting box to be used again.

sapped: knocked out with a blackjack.

speakeasy: a bar for the illegal sale and consumption of alcoholic drinks.

spokes: the rods that join the edge of the steering wheel to its center.

Thompson submachine gun: a type of machine gun that fires short pistol rounds; named after its creator, John Taliaferro Thompson, who produced the first model in 1919.

uncle: surrender; indicate a willingness to give up a fight.