Just about everyone in the US is familiar with Valentine’s Day, celebrated worldwide on February 14, but few know the history or the scientific achievements that share the same date.

Sweethearts, friends, and family send Valentine’s Day gifts to express their love. Over 1 billion Valentine’s Day cards, more than 50 million roses, some 36 million heart shaped boxes of chocolates will be exchanged, admired, and consumed as part of this holiday. And let’s not forget those that will celebrate with a with a good book, especially a love story. As our Valentine gift to you, download On Blazing Wings, a military love story by L. Ron Hubbard.

The genesis of this festive day goes back to the ancient Roman festival of Lupercalia, an annual fertility celebration. At the end of the fifth century, Pope Gelasius made it into a Christian feast declaring it to be “St. Valentine’s Day.” Which St. Valentine he was referring to is unclear as there were at least three Christian saints with that name.

Most scholars believe, however, it is in reference to St. Valentine who lived around 270 AD and was executed because he secretly married couples so husbands wouldn’t have to go to war. Valentine was imprisioned and while imprisoned he healed the jailer’s blind daughter. On the day of his execution, he left the girl a note signed, “Your Valentine.”

In wasn’t until the 14th century that the saint’s feast day became associated with love. In 1381, Chaucer composed a poem in honor or the engagement between England’s Richard II and Anne of Bohemia. As was the poetic tradition, Chaucer associated the occasion with a feast day. In his poem “The Parliament of Fowls,” the royal engagement, the mating season of birds, and St. Valentine’s Day are linked.

Over the centuries, the holiday has evolved to what it is today, a celebration of love and friendship.

Geeky Side of February 14

February 14 is also the day a number of modern day scientific discoveries and accomplishments occurred.

By way of example, on February 14, 1876, Alexander Graham Bell applied for his telephone patent and on that same day 8 years later, Thomas A. Edison was issued a patent for a “Telephone-Transmitter” (patent No. 278,044). Thanks to Bell and Edison, everyone can phone home to wish loved ones a happy Valentine’s Day.

On this day in 1929, Sir Alexander Fleming in England discovered Penicillin after leaving a plate of staphylococcus bacteria uncovered and noticing that a mold that had fallen on the culture killed many of the bacteria. Another medical milestone occured on February 14, 1984, with the first heart-liver double transplant performed on six-year-old Stormie Jones from Texas at the Children’s Hospital in Pittsburgh by Drs. Thomas E. Starzl and Henry T. Bahnson. Both of these medical achievements have impacted and prolonged the lives of individuals worldwide.

Starry-eyed lovers are not the only people to look to the heavens and dream of the herald of possibility.

It was on this day in 1980 the US launched the SolarMax satellite to investigate Solar phenomena. In addition to collecting valuable data on solar flares, sunspots and sungrazing comets, SolarMax was the first orbiting, unmanned satellite to be repaired in space, adding five more years of lifespan to its mission. 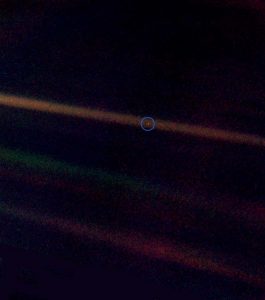 Earth as seen from Voyager 1 – a “Pale Blue Dot”

Then on Valentine’s Day 1990, looking back from above the stars, the US space probe Voyager I successfully completed a series of photographs of our Solar System including the sun and six planets. Voyager I launched on September 5, 1977 and by 1990 had travelled 3.7 billion miles and was able to look down and take the photograph.

In the photos Earth appears as a pale blue dot, the size of a pixel, against the vastness of space. All the photos were assembled into a large mozaic entitled the “Family Portrait of the Planets.” Astronomer and author Carl Sagan campaigned for many years to have these pictures taken. After seeing them, he had this to say:

“It has been said that astronomy is a humbling and character-building experience. There is perhaps no better demonstration of the folly of human conceits than this distant image of our tiny world. To me, it underscores our responsibility to deal more kindly with one another, and to preserve and cherish the pale blue dot, the only home we’ve ever known.”

These were the last photographs Voyager I took before its cameras were turned off. Let’s hope Voyager I in its ongoing journey through interstellar space doesn’t encounter a race of hostile aliens, such as the Psychlos depicted in Battlefield Earth. If you have not read Battlefield Earth, read the first 13 chapters here or listen to the first hour of the audio for free.

On Valentine’s Day 2000, the Near Earth Asteroid Rendezvous spacecraft (NEAR) achieved orbit around asteroid 433 Eros, a 21-mile-long space rock. It is the first spacecraft to successfully lock into orbit around an asteroid.

On the same day in 2020, SpaceX fired up the rocket booster that was used to launch Falcon 9 with 60 Starlink internet satellites into space on Valentine’s Day. This was the 4th time this booster was used, saving millions of dollars in getting to space. SpaceX CEO and founder, Elon Musk, described redesigned COPVs (Composite overwrapped pressure vessel) as “the most advanced pressure vessel developed by humanity.”

Whether you prefer the geeky or the mushy, we can share the love for one another on this pixel in this universe we call home.

Sign up here to get regular updates and news from us.

And don’t forget to download On Blazing Wings, our gift to you.  Or introduce your geeky other half to the classic science fiction novel, Battlefield Earth.

Learn about the NEAR spacecraft, the pale blue dot, or the Space X Falcon 9 launch and the upgraded booster.

Does space opera influence our progress to space?

Cameras of Future Past

Get your copy of Battlefield Earth:

Little Known Facts from All Frontiers Are Jealous
Scroll to top