Sabotage in the Sky trade paperback

Bill Trevillian, an ace pilot who tests new fighter planes for the Allied Forces, is competing to get a multi-million-dollar aircraft contract. But covert enemy agents have tampered with the new warbird, deliberately marking it for failure regardless of the cost.

Bill Trevillian is as ruggedly handsome as he is bold and brave. Kip Lee is as strikingly beautiful as she is fiery and fearless. And they’ve got something in common. They’re both test pilots … for rival aviation companies. Put them together and sparks are bound to fly.

The Second World War is raging in Europe, and England and France are looking to America for a fighter plane to match up with the superior Nazi Messerschmitt. The competition between Bill and Kip is fierce, and the stakes are stratospheric. Because there’s an added element in the mix: a deadly saboteur.

People say all’s fair in love and war, but when there’s Sabotage in the Sky, the flight path from heated rivalry to heated romance could lead Bill and Kip to crash and burn. 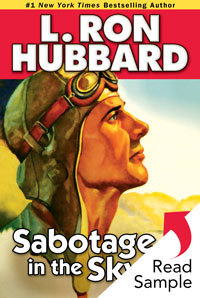 “If you crave air adventure written by an airman who knows what a hot plane can do, don’t miss Sabotage in the Sky,” wrote the editor introducing the story in 1940. And L. Ron Hubbard’s knowledge proved prophetic—unknown to the FBI, the German intelligence service, the Abwehr, was actively gathering intelligence about American military aircraft designs and manufacturing. The author also had personal aviation experience, earning a reputation as a daredevil pilot barnstorming across the United States, landing in farmers’ fields, and skimming over the top of telephone wires—experiences he put to good use as a well-known aviation correspondent and one of the most accomplished writers of aviation adventure.

Sabotage in the Sky Glossary

barograph: an instrument that continuously records changes in atmospheric pressure on a piece of paper mounted on a rotating cylinder.

blighter: a person regarded with contempt.

Bowden: Bowden wire; a type of flexible wire used to transmit a pulling force over a short distance (such as the remote shutter release cables on a film camera).

camera guns: aircraft-mounted motion picture cameras that record the firing of the guns and their target line as aimed by the pilot.

Chinese rat torture: torture whereby a rat was placed on the victim’s stomach with a small metallic container placed over it. The torturer would heat the container, making the rat dig its way out.

Dornier: Dornier DO 17, sometimes referred to as “the Pencil” due to its fundamental shape, was a twin-engine medium-size bomber utilized by the Germans during World War II.

forty-leven: an expression used to describe a huge number.

Gates: Gates Flying Circus, founded by Major Ivan Gates in 1922, was one of the most famous barnstorming shows of the time. Some of the greatest stunt fliers worked for Gates, including Clyde “Upside-Down” Pangborn, who specialized in flying upside down and changing planes in midair.

greaseball: a worker who lubricates the working parts of a machine or vehicle.

“hot papas”: personnel whose duty it is to rescue people from burning aircraft. They wear protective suits, formerly made of asbestos, to safeguard them so they can work close to burning planes.

JN-9: Curtiss N-9; a seaplane used to train US Navy pilots during World War I. The N-9 was used in 1916 and 1917 for the development of ship-mounted launch catapults and flight testing the new autopilot components intended to be used in pilotless “aerial torpedoes.” They were retired by the Navy in 1927.

Lewis: a double-barreled Lewis antiaircraft machine gun based on the gas-operated machine gun designed by US Army Colonel Isaac Newton Lewis. In 1911, Lewis designed a machine gun that weighed about half as much as a typical machine gun. The lightness of the gun made it popular in the field and as an aircraft-mounted weapon, especially since the cooling effect of the high-speed air over the gun meant that the gun’s cooling mechanisms could be removed, making the weapon even lighter.

longboat: the longest boat carried by a sailing ship.

lying to: stopping with the vessel heading into the wind.

Messerschmitt: a famous German aircraft manufacturer known primarily for its World War II fighter aircraft. In 1927, Willy Messerschmitt joined the company, then known as Bavarian Aircraft Works, as chief designer. He promoted a new lightweight design in which many separate parts were merged into a single reinforced firewall, thereby saving weight and improving performance. The Messerschmitt became a favorite of the German government and in 1938 the company was renamed with Willy Messerschmitt as chairman.

Messerschmitt 109F: German World War II fighter aircraft designed by Willy Messerschmitt in the early 1930s. It was one of the first true modern fighters of the era with all-metal construction, a closed canopy and retractable landing gear. With its new lightweight construction and improved performance, the aircraft won the German air force fighter contest in 1935 and soon thereafter became a favorite of the German government.

NC: North Carolina; US Coast Guard Air Station located in Elizabeth City, North Carolina, on the Pasquotank River near the Atlantic coast. The air station was commissioned in August 1940 and was initially equipped with three seaplanes, three amphibians and four landplanes. It was established for its potential strategic value as a seaplane base and was utilized during World War II under US Navy control for Search and Rescue (SAR), anti-submarine and training missions.

Pan Am: Pan American World Airways, the principal international airline of the United States from the 1930s until it closed its operations in 1991. Originally founded as a seaplane service out of Florida, the airline became a major company credited with many innovations that shaped the international airline industry.

plaster of Paris: a white powder that when mixed with water forms a quick-hardening paste. It is used in the arts for sculpting and making casts, and in medicine for molding casts around broken limbs.

Prussian: in the manner of a military officer from Prussia. Prussia, a former northern European nation, based much of its rule on armed might, stressing rigid military discipline and maintaining one of the most strictly drilled armies in the world.

ring mount: a rotating mount on an aircraft that allowed the gun to be turned to any direction with the gunner remaining directly behind it.

seat-stick: a walking stick with handles at one end that fold out to form a small seat.

slipped: sideslip; (of an aircraft when excessively banked) to slide sideways, toward the center of the curve described in turning.

snap roll: a maneuver in which an aircraft makes a single quick revolution about its longitudinal axis while flying horizontally.

tab: a small, adjustable hinged surface, located on the trailing edge of the aileron, rudder or elevator control surface; also called trim tab. It is adjusted by the pilot to maintain balance and to help stabilize the aircraft in flight.

terminal velocity: the constant speed that a falling object reaches when the downward gravitational force equals the frictional resistance of the medium through which it is falling, usually air.

Teuton: a native of Germany or a person of German origin.

wind tee: a large weathervane shaped like an airplane, or a horizontal letter T, located on or near a landing field, to indicate wind direction to airplane pilots.

wing walking: the act of moving on the wings of an airplane during flight. Wing walkers were barnstormers who were the ultimate risk takers of their day. Performing stunts on the wings of a plane during flight started in 1917 when a US Army pilot climbed out on the wing of his plane while in mid-air to resolve certain problems. This act boosted morale and confidence in his fellow pilots, and as a result, the art of wing walking took off.

wooden nickels, don’t take any: take care of yourself; goodbye and watch yourself. Used as an amiable parting salutation.