You are here: Home1 / Blog2 / Battlefield Earth3 / Was It a Mistake to Broadcast Earth Coordinates on Voyager? 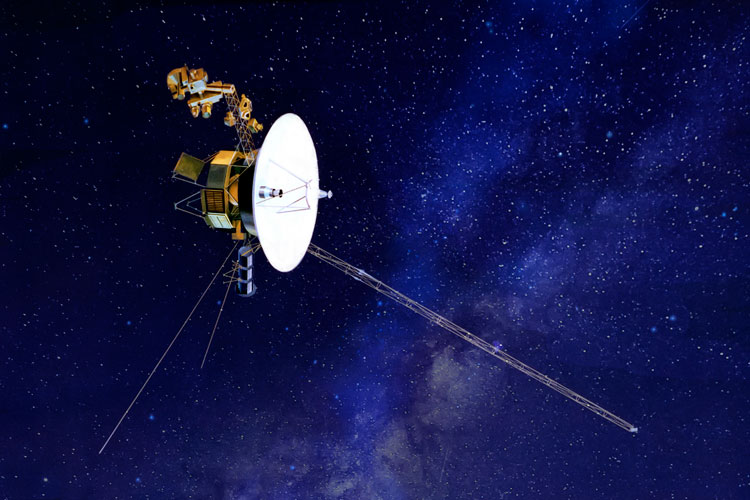 Was It a Mistake to Broadcast Earth Coordinates on the Voyager Spacecraft?

According to the science fiction novel Battlefield Earth by L. Ron Hubbard, the answer is yes.

“Man apparently sent out some kind of probe that gave full directions to the place, had pictures of man on it and everything. It got picked up by a Psychlo recon…. The probe and the pictures were on a metal that was rare everywhere and worth a clanking fortune. And Intergalactic paid the Psychlo governors sixty trillion Galactic credits for the directions and the concession. One gas barrage and we were in business.” —Chapter 1, Battlefield Earth

In the novel, the Psychlo invaders consider Earth part of a “rim star system,” way out on the edge of a galaxy in the 16th universe. This was the last universe to be discovered by their race and was never wholly mapped.

And Earth might have gone overlooked had it not been for the Voyager probes.

Instead, with the discovery of the gold disks they carried, the Psychlos invaded, gassed the planet and wiped out most of the population so they could mine Earth for gold and its mineral resources.

Pretty much a routine matter for the Psychlos and all in the name of intergalactic mining, profits, and banking. From their perspective, they owned the intergalactic rights and through the power of gold, they could secure control of whole planets and galaxies.  To find out what happened, download the first thirteen chapters for free.

Attached to the outside of Voyagers 1 and 2 is the Golden Record, inscribed with a map showing our solar system’s position relative to its 14 nearest stars.

The record includes images, scientific information written in a universal language, greetings in 55 languages, a collection of music and a message from the then President of the United States, Jimmy Carter. Here’s a video of the 116 images NASA wanted aliens to see.

Both spacecraft will continue to drift for billions of miles carrying their message to any intelligent spacefaring civilization that might happen to discover them.

Where is the Voyager Now?

Today, the Voyager 1 and 2 spacecraft probes still receive routine commands and return data to Earth. They are not expected to lose power until the 2020s. Voyager 1 became the first spacecraft to enter interstellar space in 2012 and Voyager 2 is now traveling through the outer layers of our solar system.

At their current speed of 10 kilometers per second, it will take roughly 40,000 years to go from one star to another. So chances of a sufficiently powerful radar being able to detect them seem unlikely.

Not everyone believes it was a mistake to send out the coordinates of Earth.

Back when the Golden Record was created “all the people I dealt with were optimists and they thought the ETs would be friendly,” says Frank Drake, designer of the map on the record. “Nobody thought, even for a few seconds, about whether this might be a dangerous thing to do.”

With what we know of the galaxy and the number of inhabitable planets there could be, some think it is dangerous to freely broadcast our exact location. Hostile aliens, like the Psychlos in Battlefield Earth, could be the end result.

Others think the method used to design the map was clever but inherently flawed as long-term changes in space will render the map useless. Possibly by the time anyone finds it, they will encounter a riddle that will be very difficult to decipher.

Regardless, the truth is the Voyagers spacecraft probes are out there, the map can be found, the code can be broken and a hostile alien race could very well invade our planet. Much like the scenario in Battlefield Earth:

Or, on the other hand, we could establish interstellar friendships with the likes of E.T. and the “heptapods” described in the 2016 movie Arrival.

So, was it a mistake to send out a map of Earth’s coordinates?

To find out what could happen if the Psychlos find the Voyager spacecraft, read the first 13 chapters for free.  Battlefield Earth Sample Book

The Backstory to Robert Bloch’s “Psycho”