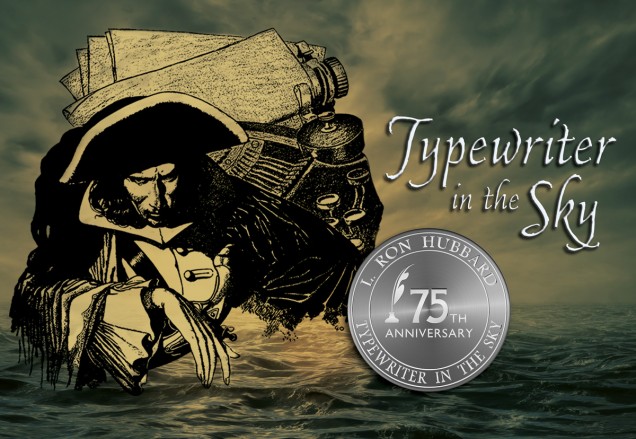 Typewriter in the Sky, the third in the trio of landmarks of speculative fiction published by L. Ron Hubbard in 1940, first appeared in the November and December issues of Unknown.

A richly original story-within-a-story—the tale of an author and the main character in a novel he’s writing locked in a frantic, funny do-or-die battle of wits and wills—Typewriter in the Sky is one of Hubbard’s most enduring works. Like Fear and Final Blackout, it introduced the genre to a new level of creative invention. And like them, it has resonated across the succeeding generations of speculative fiction, frequently inspiring imitation in print, on the screen and in the theater. A Broadway musical, for example, switched the setting and the characters to Hollywood, but the love-hate duel between the author and his fictional hero remained the production’s centerpiece. As author-editor Frederik Pohl confirmed: “Fans and other writers were doing variations on that for years.”

In his introduction to Battlefield Earth, Hubbard observed that, unlike science fiction, “fantasy gives you no limits at all.” In Typewriter in the Sky, this boundlessness springs exuberantly to life. Mike de Wolf, a dilettante piano player, finds himself stranded in “Blood and Loot,” a swashbuckling buccaneer adventure novel—“flashing rapiers, tall ships, brave men”—being written against an inhospitable publishing deadline by his friend, the eminent “fictioneer” Horace Hackett. Not only is Mike de Wolf in the novel, but also to his deep dismay he discovers he has been cast as the notorious villain, Miguel de Logo. Knowing full well that Horace Hackett villains are always fated to die, Mike-as-Miguel plots desperately to save himself and change the outcome of the story.

Meanwhile, Horace pounds away at his “typewriter in the sky” littering the Old Spanish Main with hilarious anachronisms (Mike plays Mozart on a piano labeled “Steinway, Chicago”) and lamenting how characters sometimes take on lives of their own.

Hubbard took gleefully inventive liberties with the historic details of the Spanish Main. Indeed, at the time, there was a widely shared view that Typewriter in the Sky was a masterly parody of Sabatini’s Sea Hawk and Captain Blood pirate extravaganzas. And it is true that Hubbard certainly knew the Caribbean intimately, both from extensive research and firsthand from his motion-picture and mineralogical journeys of the early 1930s.

Typewriter in the Sky’s stature as a creative milestone in the history of fantasy has been undeniable since its debut in Unknown. Critics and literary historians regard it as the prototypical “inward voyage” or “journey of the mind” story. Others see its interactive “interior realities” as a pioneering application of “virtual reality” to the storyteller’s art in both the “real” world of Horace Hackett’s New York City and Mike de Wolf’s “virtual” world of the Spanish Main. While bestselling authors Mike Resnick and Robert J. Sawyer cite the story as an example of “Recursive Science Fiction,” a subgenre described as science fiction about science fiction.

James Sullos, President Edgar Rice Burroughs, Inc., offered his congratulations on the diamond anniversary of the publication of Typewriter in the Sky with a presentation at the L. Ron Hubbard Library in Hollywood, to Galaxy Press President John Goodwin. The plaque presented reads:

“Congratulations to L. Ron Hubbard on the 75th anniversary of Typewriter in the Sky. What literary and creative genius to have the featured antagonist modify the author’s storyline to become the protagonist.

“Edgar Rice Burroughs and Mr. Hubbard are pulp fiction legends. Their personal interchanges spoke fondly of their respective talents. May both of their legacies continue to survive over the centuries.”

5 Great Gift Ideas for Book Readers on Your Holiday List