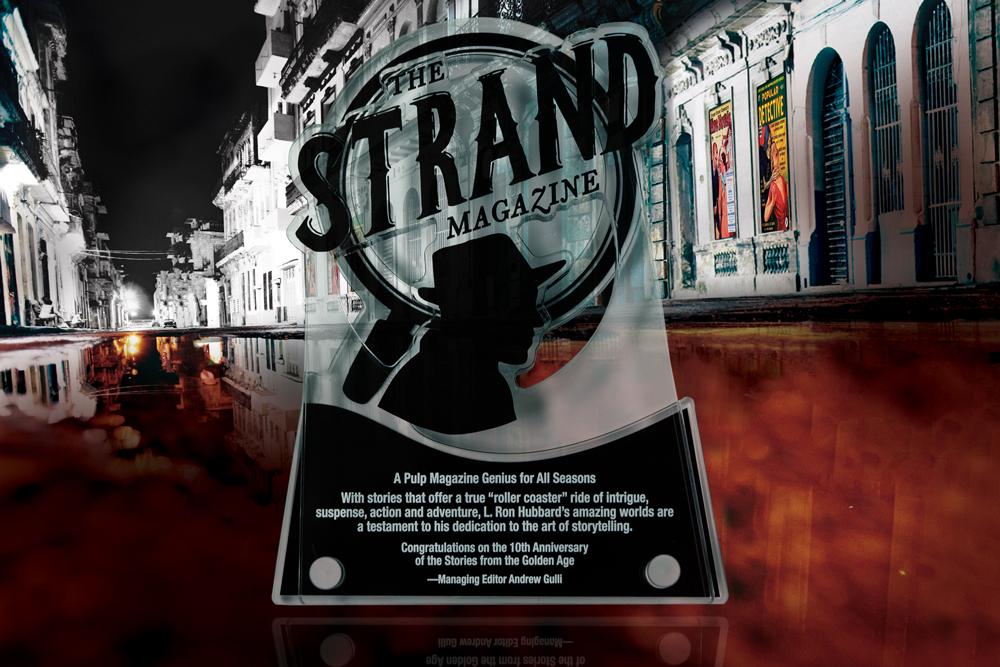 Andrew Gulli, Editor of The Strand Magazine, recognized L. Ron Hubbard for “stories that offer a true ‘roller coaster’ ride of intrigue, suspense, action, and adventure” calling him “a pulp fiction genius for all seasons.” In the form of a spyglass stand, the award was announced at the 10th-anniversary event celebrating the Stories from the Golden Age at the L. Ron Hubbard Theatre.

In wanting to recognize Galaxy Press for this milestone achievement, Gulli stated that the benchmark for entertainment is to “publish page-turning and gripping works: mission accomplished.” Whether for his best mystery books or best thriller books, “L. Ron Hubbard’s amazing worlds are a testament to his dedication to the art of storytelling.”

To make the point, in a review done, The Strand Magazine noted, “L. Ron Hubbard’s Spy Killer, a 1936 espionage thriller, he introduces the mysterious Russian woman Varinka Savischna with this line: ‘The steam that rose from her cup of tea was not less elusive than the quality of her eyes.’ Writing like this has a cadence, a lilting quality that not only establishes characterization but engages the reader. We learn more about Varinka Savischna in those nineteen words than if Hubbard had written a full page of prose.”

Like other great pulp writers that included names such as Edgar Rice Burroughs, Raymond Chandler, Agatha Christie, and Dashiell Hammett, L. Ron Hubbard rapidly became a mainstay of popular fiction in the 20th century. However, Hubbard was unlike most authors of the day, as his stories covered a wide spectrum of genres, including adventure, western, mystery, detective, fantasy, science fiction, and even some romance, using his own and 15 pen names.

For more information about the mystery & suspense books in the Stories from the Golden Age, go to galaxypress.com/mystery-stories.