From the ashes of humanity rises a young hero, Jonnie Goodboy Tyler. Setting off on an initial quest to discover a hidden evil, Jonnie unlocks the mystery of humanity’s demise and unearths a crucial weakness in their oppressors. Spreading the seeds of revolt, Jonnie and a small band of survivors pit their quest for freedom in an all-out rebellion that erupts across the continents of Earth and the cosmic sprawl of the Psychlo empire in this epic military science fiction adventure.

“L. Ron Hubbard was one of the central figures in the creation of science fiction and Battlefield Earth was at the center of his own work.” —Eric Flint 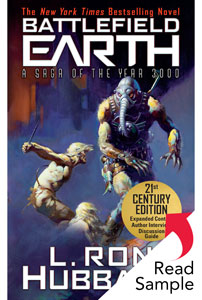 Battlefield Earth, of course, signaled L. Ron Hubbard’s return—after an absence of three decades of extensive research, writing and lecturing about the human mind and the spiritual nature of man—to popular literature generally and, specifically, to speculative fiction, whose modern form and dimensions he was instrumental in defining.

The imaginative diversity of the novel’s characters and alien races, its military artifacts and striking technologies and mathematics make it the perfect motivation for STEM learning.

“Want to get your kid excited about STEM? Battlefield Earth will give you the talking points, in fact, they’ll already be talking about it.” —S.G. Educator

• US Golden Scroll and Saturn Awards

Read the novel that changed the shape of military science fiction

To the Stars hardcover