L. Ron Hubbard wrote the following article for the October 1, 1935 issue of Adventure magazine. He had already been a sixteen-year-old enlistee with the Montana National Guard’s 163rd Infantry. And in 1930, he was First Sergeant of the 20th Marine, 2nd Battalion where he lead Company G to a Grand Trophy in an Eastern Seaboard Marine Corps Reserves competition.

So it wasn’t without considerable first-hand experience that he was able to write his military fiction stories with such vivid color. 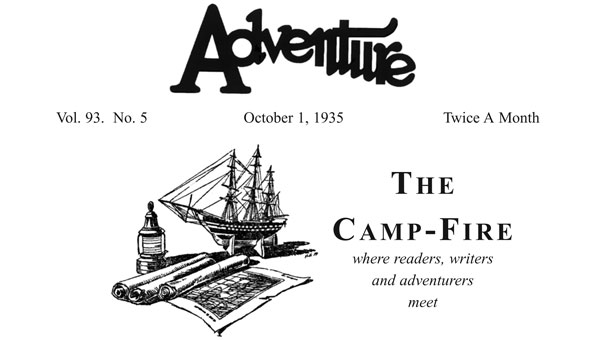 L. Ron Hubbard joins our Writers’ Brigade with his leatherneck yarn, “He Walked to War.” Hubbard is a tall red-haired chap with a service background, his father being an officer. He introduces him­self at the Camp-Fire.—Howard V. L. Bloomfield, Editor.

I was born in Nebraska and three weeks later went to Oklahoma. From there to Missouri, then to Montana. When I was a year old, they say I showed some signs of settling down, but I think this is merely rumor. Changing locales from the Pacific Coast to the Atlantic Coast every few months, it was not until I was almost twelve that I first left the United States. And it was not until I was sixteen that I headed for the China Coast.

In spite of changing schools, I received an education. I have some very poor grade sheets which show that I studied to be a civil engineer in college.

Civil engineering seemed very handsome at the time. I met the lads in their Stetsons from Crabtown to Timbuktu and they seemed to lead a very colorful existence squinting into their transits. However, too late, I was sent up to Maine by the Geological Survey to find the lost Canadian Border. Much bitten by seven kinds of insects, gummed by the muck of swamps, fed on johnny cake1 and tarheel,2 I saw instantly that a civil engineer had to stay far too long in far too few places and so I rapidly forgot my calculus and slip stick and began to plot ways and means to avoid the continuance of my education. I decided on an expedition into the Caribbean.

It was a crazy idea at best and I knew it, but I went ahead anyway, chartered a four-masted schooner and embarked with some fifty luckless souls who haven’t ceased their cursings yet. Our present generation just doesn’t take to salt horse, dried peas, and a couple quarts of water a day.

But the expedition did the trick. I did not have to return to college. Instead I returned to the West Indies.

I might remark upon a coincidence which has always amazed me. While in the West Indies I discovered signs of gold on an island and, harboring the thought that the conquistadores might have left some gold behind, I determined to find it.

. . . After half a year or more of inten­sive search, after wearing my palms thin wielding a sample pick, after assaying a few hun­dred sacks of ore, I came back, a failure. 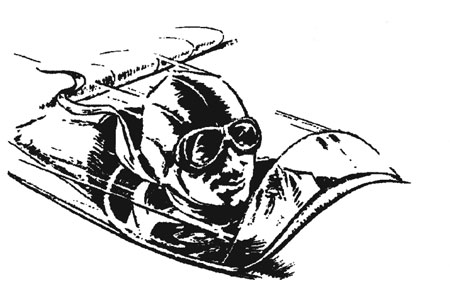 But a month after my return to Maryland, I discovered a vein of honey-comb quartz in the back pasture. The body of ore was tremen­dous, the visible vein several yards wide at the narrowest. Under the $20.673 an ounce, it assayed $82.34 a ton, and it is now worth about $145 a ton. However, to mine it takes money and I would have to stay close to Maryland. It’s still there.

Chronological narration, in this short sketch, is impossible. Therefore, permit me to jump about a bit.

I was once convinced that the future of aviation lies in motorless flight. Accordingly I started gliding and soaring with the rest of the buzzards, and finally succeeded in establishing a record which has no official existence whatever and no reason, indeed, for existing. I traveled better than eighty miles an hour for twelve minutes in a soar­ing plane, maintaining the same altitude about an airport which is set on a flat plain. Answer: Heat lift from the circling concrete road. 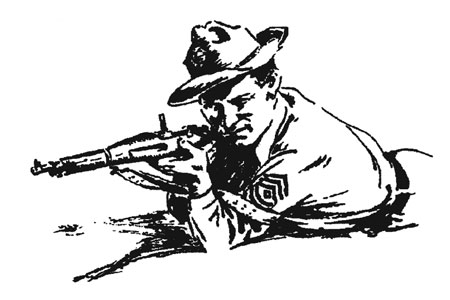 From there I went into power flight, the high spot of which came on a barnstorming trip through the Midwest in a five-lunged4 crate which staggered rather than flew All one summer, I tried very hard to meet St. Pete, but evidently that gen­tleman either lost my name from the roll or my luck is far better than I think it is.

Unfortunately, in my Asiatic wanderings, no one, not even Hindu fortunetellers, thought to inform me that I would some­day make my living with a typewriter and so I completely forgot to conduct myself informatively and devoted my time to enjoying life.

In Peiping, for instance, I did not avail myself of photographic impressions I might well have gained. I completely missed the atmosphere of the city, devoting most of my time to a British major who happened to be head of the Intelligence out there.

In Shanghai, I am ashamed to admit that I did not tour the city or surrounding coun­try as I should have. I know more about 181 Bubbling Wells Road and its wheels5 than I do about the history of the town.

In Hong Kong…well, why take up space? Time after time, people accuse me of having been in the Marines. Pushed right up against the wall, I am forced to admit a connection with that very cosmopolitan outfit, however short lived and vague. I was once a top-kicker6 in the 20th because, as they sing in Shin-ho,7

I walked down the street
Without a cent in my jeans,

And that is the reason
I joined the Marines.

I am not sure that calling squads east and west fits a man for writing, but it does give him a vocabulary.

One thing I might mention in connection with the leathernecks, most of the fiction written about them is of an intensely dra­matic type, all do and die and semper fidelis and the dear old flag.

To me the Marine Corps is a more go-to-hell outfit than the much-lauded French Foreign Legion ever could be. The two are comparable in many ways. God knows what you’ll find in either, from college professors to bellhops. Just why the disap­pointed lover has to sneak off for North Africa all the time is a riddle. More men have taken refuge in the Corps than in the Legion and, judging from association, leathernecks certainly lead a sufficiently exciting existence. 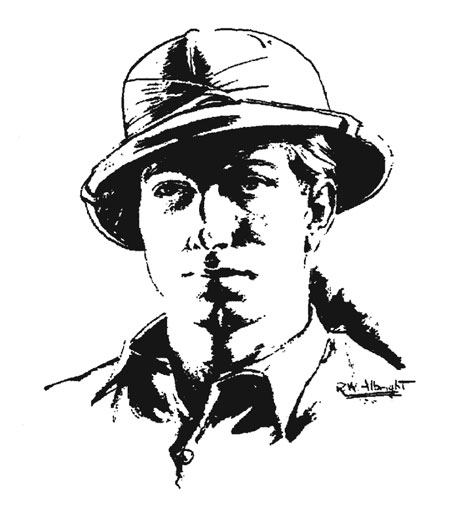 I’ve known the Corps from Quantico to Peiping, from the South Pacific to the West Indies, and I’ve never seen any flag-waving. The most refreshing part of the USMC is that they get their orders and start out and do the job and that’s that. Whether that job was to storm the heights of Chapultepec so that the United States Army could proceed, or to dislodge a crazy gentleman named John Brown from an arsenal at Harpers Ferry, or to knock off a few Boxers for the glory of England, your Marine went and did the job and then retired to bind up his wounds while everyone else went on parade.

Let it suffice. This is more than a thumb-nail sketch, but I hope it’s a passport to your interest. I know a lot of you out there, and I haven’t heard from you in years. I know I haven’t had any address, but I’m certain the editor will forward my mail.

When I get back from Central America, where I’m going soon, I’ll have another yarn to tell.

For a look at the military fiction by L. Ron Hubbard, click here.

Military Science Fiction: Rayguns, Rocketships, and a Dash of Gold