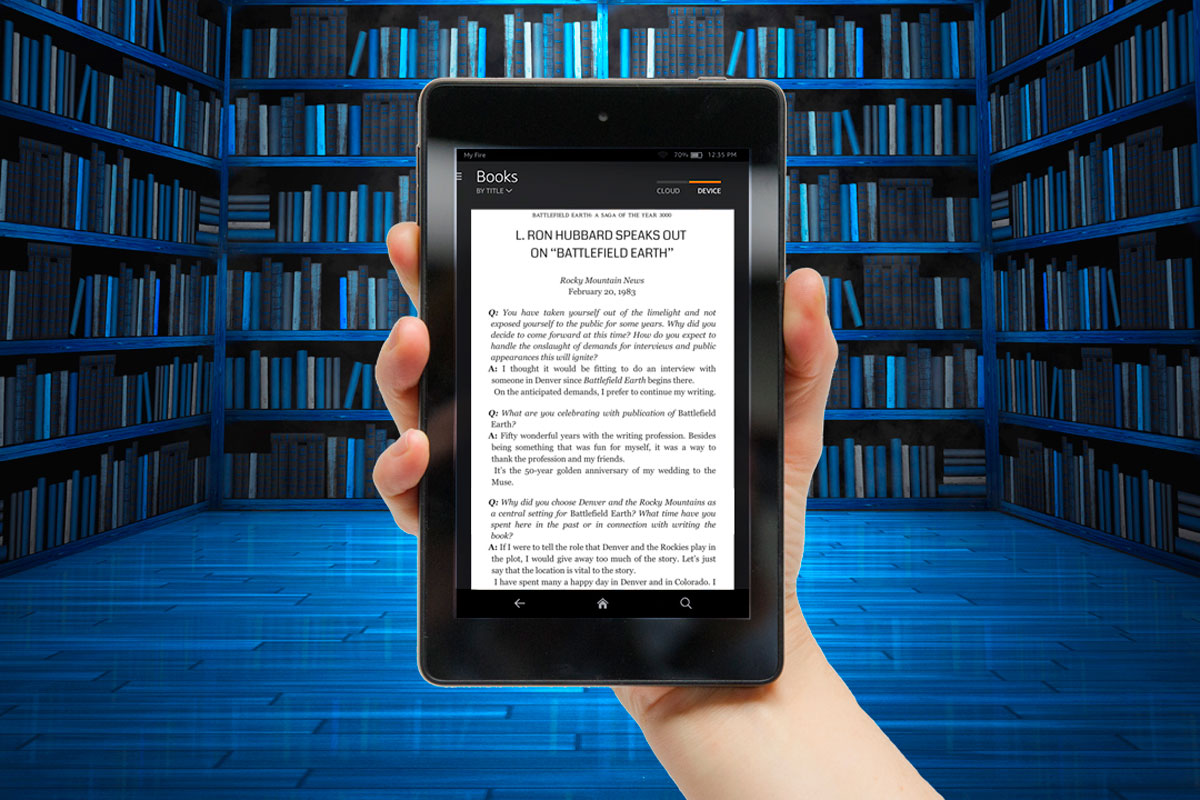 Fandom historian Bob Bly proves that science fiction authors predict technology like e-reading and the Kindle in sci-fi books like Battlefield Earth. For an example and more information visit http://amzn.to/2ci7hWj.

Science fiction authors have long considered it their role in propelling technology, and ultimately the civilization, into the future. A book by science fiction author and historian Bob Bly reveals evidence of how these stories predicted e-reading (Book: The Science in Science Fiction).

As L. Ron Hubbard put it himself in the introduction of the New York Times bestselling sci-fi epic Battlefield Earth, “Science fiction does NOT come after the fact of a scientific discovery or development. …It is the dream that precedes the dawn when the inventor or scientist awakens and goes to his books or his lab saying, ‘I wonder whether I could make that dream come true in the world of real science.’”

Mr. Bly noted that soon after Battlefield Earth’s 1982 release, a newspaper reporter from the Denver Rocky Mountain News asked Mr. Hubbard whether he thought paperbound books would become obsolete. He replied, “Books, too, will change. You will be able to carry your own pocket computer library.”

In effect, Mr. Hubbard predicted the invention of the Kindle and e-reading around a quarter of a century before the Kindle was released by Amazon. This 20-page interview is now included in the 21st Century trade paperback edition of Battlefield Earth. (Amazon/BattlefieldEarth)

In the 1899 story When the Sleeper Wakes, H.G. Wells imagined the Babble Machine where the user connected his machine to the electronic content of a central news syndicate via a cable. Pulling a lever, the news was read aloud to him by the machine–making paper newspapers obsolete.

Another case is the 1961 novel Return from the Stars, when Stanislaw Lem predicted digital books on a device he called the “opton.” The books were crystals with recorded content. By placing a crystal in an opton, they could read the book on the device’s screen–one page at a time.

In his Battlefield Earth introduction, L. Ron Hubbard called science fiction “the herald of possibility.” And e-readers, whether called the Babble Machine, Opton or the Kindle, are further proof that science fiction does come before science fact.

For more information on the 21st Century Battlefield Earth, visit (Amazon/BattlefieldEarth). The publisher is offering a collectible Frank Frazetta poster of the cover art free with paperback or audio purchase, while supplies last.

For more information on bestselling author Bob Bly, visit (Amazon/BobBly). Bob Bly is the author of more than 85 books including a collection of science fiction stories, Freak Show of the Gods and Other Tales of the Bizarre (Quill Driver Books) and The Science in Science Fiction (BenBella).

L. Ron Hubbard Predicted the Kindle–Nearly 25 Years Before Its Invention
Scroll to top