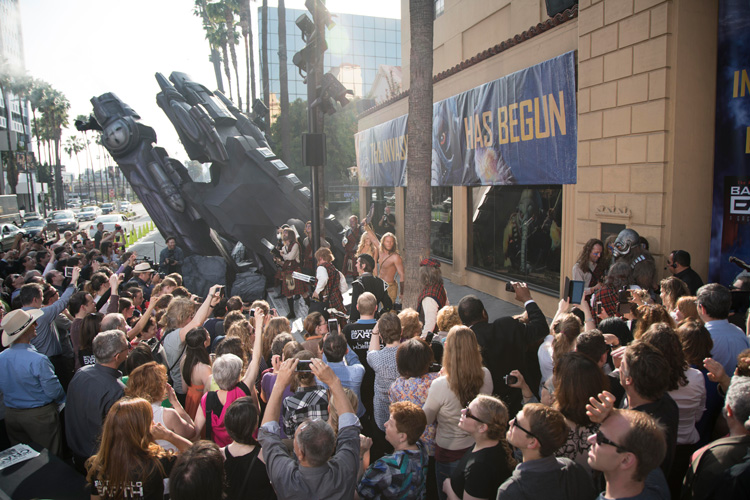 Alien Spacecraft Crashes on Hollywood Blvd
for Release of the 21st Century Edition of the International Bestselling Novel
Battlefield Earth: A Saga of the Year 3000 by L. Ron Hubbard

Hollywood, CA – An alien spaceship crashed onto Hollywood Blvd. today, jutting 25 feet out of the ground. Wreckage was observed in front of Galaxy Press, publisher of the 21st century edition of the international bestselling novel, Battlefield Earth by L. Ron Hubbard. The malevolent alien security chief Terl from the planet Psychlo—the novel’s chief villain—was extracted and captured by Jonnie Goodboy Tyler and Chrissie—the story’s heroes—and a band of 10 Scotsmen accompanied by a bagpiper and drummer, formally marking the novel’s release. Battlefield Earth is a swashbuckling science fiction saga of adventure, daring and courage when man is an endangered species and the future survival of what’s left of the human race is at stake.

The event started in front of the Chinese Theatre with Jonnie, Chrissie and Scots headed for the crashed spaceship in search of Terl. The search party arrived at the crash site where hundreds of onlookers were standing by. Amid considerable smoke rising from the spaceship, Terl was extracted and captured. The Scotsmen, once having Terl secured, began shooting Battlefield Earth t-shirts from their guns to the enthusiastic crowd.

Following the event, guests were invited inside Galaxy Press where Barnes & Noble had set up an off-site bookstore featuring the new book and audiobook.

Jonnie Goodboy Tyler and Chrissie were performed by Aaron Groben and Lauren Compton. Terl was performed by Terl.

Since its initial release in 1982, Battlefield Earth has sold over 4 million copies and was rated #3 of the top 100 novels of the 20th Century in the Modern Library Readers Poll. This new edition has 50 new pages containing handwritten author notes made as he was writing the book, along with an interview published in the Rocky Mountain News shortly after the book’s release.

The 47½ hour long audiobook, with 67 voice actors, 150,000 sound effects and 3 hours of original music is the biggest and best science fiction audiobook ever produced. And with its immersive sound, is a true movie in the mind.

The Battlefield Earth book and audiobook are now available at Amazon, Barnes & Noble, Books-a-Million, Kobo, and wherever books are sold.