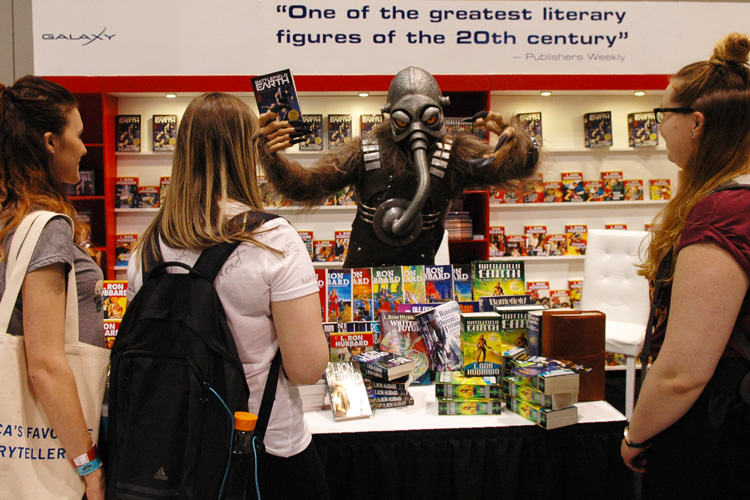 Chicago, IL — Terl, the evil alien Security Chief from the planet Psychlo, was selling copies of his upcoming new release of the epic science fiction novel Battlefield Earth 21st Century Edition at the BookCon in Chicago’s McCormick Place this past week. BookCon is the ultimate celebration of books, one day a year where readers and publishers are able to interact with each other.

Written by New York Times bestselling author L. Ron Hubbard, Battlefield Earth is set 1,000 years in the future. In 1977, Earth sent a probe into space with its quest to establish if there is intelligent life beyond our planet. On that probe was a disc made from one of the most valuable metals in the galaxy. It also had directions to our planet. In 2012 that probe hit interstellar space. In 2016 we got our answer. And Terl was on hand to deliver that message.

In talking about the book, the fans stayed just out of talons reach to hear what Terl had to say. His message was very clear, the book releases on Father’s Day and they had better get a copy of either the book or audiobook for their dad.

Terl’s Book Con visit in Chicago is part of a national advance publicity plan leading up to the Father’s Day 2016 release of the new edition of Battlefield Earth with expanded content, including never-before-published author handwritten notes as well as a 47½ hour multicast unabridged audiobook, the biggest sci-fi audiobook ever produced.