Terl with publisher from Jordan at the BEA 2016 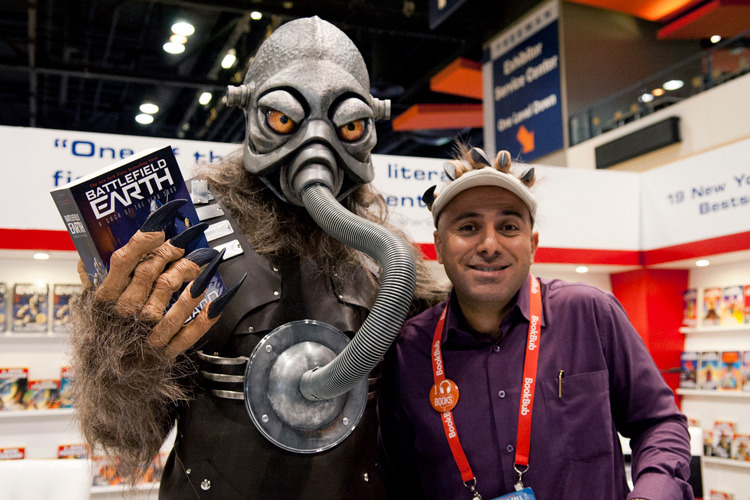 Chicago, IL — Galaxy Press attended the Book Expo America convention in Chicago where Terl, from international bestselling novel Battlefield Earth by L. Ron Hubbard, made his debut to an enthusiastic crowd of booksellers and librarians. His mission was to assure them that Man was an endangered species (which is also the now-famous opening line of Battlefield Earth.)

This included Terl lending a hand to this book publisher from Jordan who wants any L. Ron Hubbard books in Arabic for distribution. Terl determined that it was important for him to personally let the booksellers and librarians attending the show know to have plenty of stock on hand for the upcoming release of his book.

Terl’s Chicago visit is part of a national advance publicity plan leading up to the Father’s Day 2016 release of the new edition of Battlefield Earth with expanded content including never-before-published author handwritten notes as well as a 47½ hour multicast unabridged audiobook, the biggest sci-fi audiobook ever produced. Famed artist Frank Frazetta, who Hubbard referred to as “King of Illustrators,” painted “Man the Endangered Species” which is now the cover art for the new volume.

With 19 New York Times bestsellers and more than 350 million copies of his works in circulation, L. Ron Hubbard is among the most widely read and published authors of all time. In celebration of his fiftieth anniversary as an author, he again returned to the forefront of popular literature with his monumental epics Battlefield Earth and the ten-volume Mission Earth series. Together, these titles dominated international bestseller lists for 153 weeks, and still remain among the all-time classic works of modern speculative fiction.