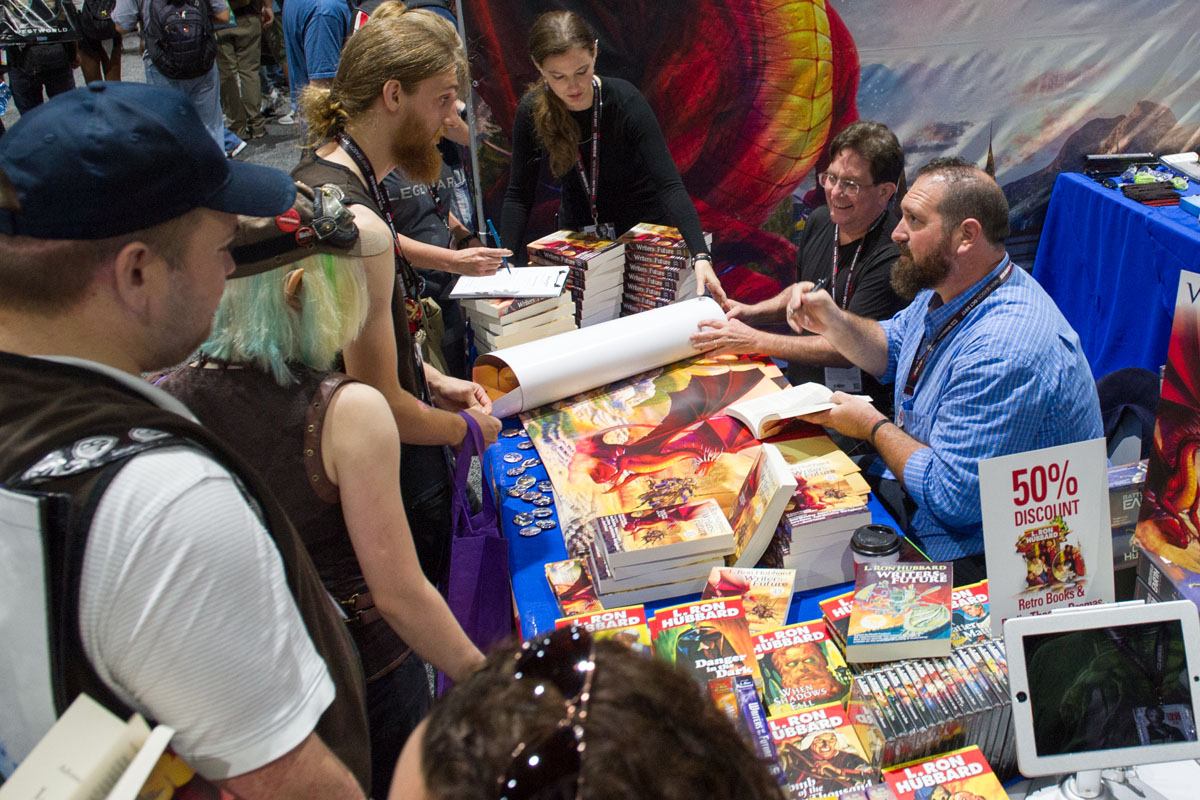 Check Out How SD Comic Con Welcomed Writers of the Future

Over 500 Comic Con attendees had an opportunity to meet Writers of the Future Volume 33 winners Jake Marley and Andrew L. Roberts to get an autographed copy of volume 33 and the beautiful poster of the cover art, Crimson Dawn, painted by Larry Elmore.

We thought we would let Jake and Andy tell you in their own words what it was like. Here is Jake’s overview of the event

“Getting to sign copies of L. Ron Hubbard Presents Writers of the Future at the San Diego ComicCon was a dream come true. The last time I was in San Diego for the con was eight years ago, and I promised myself I wouldn’t return until I was a professional sitting on the other side of the table.

“Galaxy Press not only got us a pro-badge, but we had a non-stop signing that lasted until we ran out of copies of the book to sell! I’m delighted to know that so many new readers have copies of my story on their shelf. I can’t think of any other possible way my first published story would’ve ever brought me to SDCC, let alone give me the kind of opportunity to meet so many amazing people.

“Once our books were sold out, Andrew L. Roberts and I walked around the enormous convention and managed to find ourselves talking with folks at Simon & Schuster and Penguin/Random House about the contest and our experience as newly published authors.

“There is no other contest that will provide you with the opportunities that Writers of the Future does. You’re part of a group when you win, so you can meet up and go to signings together, you can get tips from some of the biggest pros in the industry, and you can have the confidence to take the next step in your publishing career. The lessons I’ve learned from Writers of the Future are going to help me to achieve all of my writing goals, and they’ve inspired me to dream even bigger.

“Thanks again to everyone at Galaxy Press for making this possible. I had an AMAZING time and if you ever have any other venues you’d like me to hop aboard, let me know and I’ll do my darnedest to make it. I love hanging out with all of you, and I appreciate this more than you can know!” –Jake

Here are Andrew’s thoughts on the signing—

“Jake makes it easy! I learned more from him on the fly than I ever expected. He has a terrific talent when it comes to connecting with people, but more importantly, he really makes the effort to push things to the next level—and he succeeds!

“I think it helped too that he and I click because we are genuine friends, but anyone who signs with Jake is likely to grow and get better at this aspect of being a writer.

“Ultimately though, what really made the event work so well was having the support and energy of the whole Galaxy Press crew. Everyone who was there was a vital part of the process, from our barkers handing out posters and bringing folks in, to Sarah talking to the people one on one in the line and prepping them for us, and finally with Emily who took care of the actual sales—they did the real work so that all Jake and I had to do was happily engage, sign books and be good ambassadors for the Contest. We had the easiest part and the funnest.

“From this experience and from my previous experiences signing with Doug (Souza) and Sean (Hazlett) I have become convinced that signing in pairs or threes is the best way to go. It keeps the energy positive. But man! Having a whole support team was golden.

“I really hope you do this again at other conventions as well as Comic Con. And if you do I hope you include some of the artists as well as the writers, because Jake and I always asked each customer if they were writers or artists and then made a point of promoting both aspects of the contest. We were also quick to express gratitude when the customers identified themselves as ‘readers.’ Because we only get to be writers so long as there are readers.” —Andy

In addition to Jake and Andrew, past winner Steve Pantazis (author of “Switch,” Writers of the Future Volume 31) and his wife came by to congratulate them and wish them well with their signing.

Writers of the Future 2nd Quarter 2017 Winners
Scroll to top