The document was clear and Earth’s fate hung in the balance:

“(a) they (earth) are getting dirty and making fresh air scarce by using dirty fuel; (b) they are short on real fuel and can’t build cheap sewage plants; and (c) they are unable to control their economy because they have such expensive fuel. So, whatever else needs fixing they are going up in smoke unless they have and use proper technology.”

The words sound familiar but they are not a headline from the articles in Time Magazine or NASA or Vanity Fair or the nightly news warning of Earth’s rapidly failing environment. They are from a science fiction story written in 1983.

A detailed environmental cleanup project for Earth was put forward in the 1983 science fiction work Mission Earth by L. Ron Hubbard. In fact, it is the basic premise of the series.

Mission Earth, a satirical science fiction dekalogy (ten book series), pokes a humorous (and sharp) stick at the political, financial, cultural, and social issues standing in the way of saving planet Earth from itself.

Does anyone take it seriously? Could there be a germ of truth between the lines of the author’s imagination? Isn’t science fiction just outer space and warp drives and aliens that speak perfect English?

To be sure, we are polluting our planet beyond recognition. We can’t really deny that. Where does that plastic really wind up when you dutifully place it in your recycling bin and it disappears from your curb? Does it really go to a recycling center to be properly disposed of? And how is “properly disposed of” defined?

What about the millions of cell phones replaced by the newest model with the fancy camera? Are they disappearing into landfills in a third world country or are they carefully taken apart and each and every component properly recycled?

Ok, so there are a few problems. But what about those nasty hydrocarbons wrecking our biosphere, as a few scientists claim? There’s a subject that gets a few screaming headlines.

I admit, a few billion tons of that in the atmosphere doesn’t sound very safe either. But step back, take a deep breath (cough!) and look out on that burning sun or freezing ice or towering category 5 hurricane (or whatever is going on in your part of the planet) and ask yourself, “Is it really bad enough to base the whole plot of a book on it?”

See, the point of the mission in Mission Earth is to ensure that we earthlings don’t render our planet useless by destroying our atmosphere and natural resources before the Voltar confederacy is ready to invade us. Enter Jettero Heller (Jet to his friends), combat engineer and royal officer of the confederacy, sent to do our job for us. 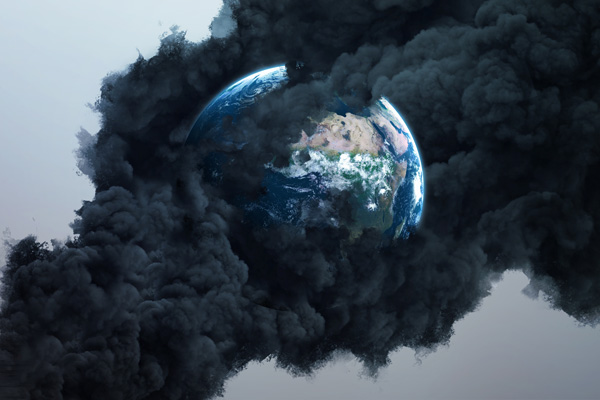 In Volume1, The Invaders Plan, the Grand Council of the Voltar confederacy is briefed that Earth’s self-destructive ways are dangerously close to upsetting their all-important invasion timetable.

“‘He snapped the roll back to him like another magician’s trick but there was only hard scientific certainty in his voice tones. As he looked at the top lines, he said, ‘Compared to the last reliable observations taken a third of a century ago, the oxygen in the oceans there has depleted fourteen percent. This means a destruction of the hydrographic biosphere.’

‘I beg pardon?’ said some Lord at the huge table.

Captain Roke abruptly realized he was not talking to a totally informed audience. ‘Hydrographic biosphere is that part of the planet’s life band that lives in the oceans. Samples show pollution, possibly oil spills from these figures of increased petroleum molecules in ocean …’ 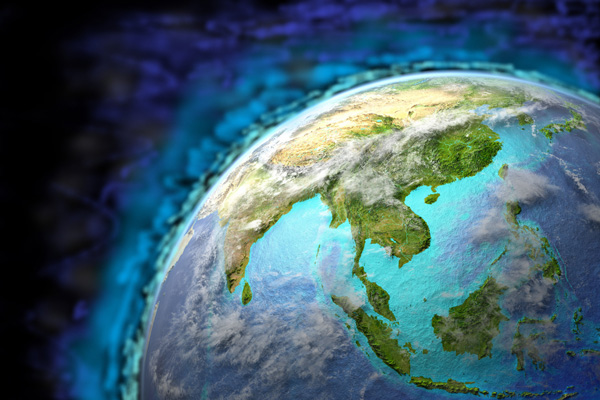 ‘The oil that forms when cataclysms bury living matter: under pressure, the remains become a source of carbon fuel. They pump it to the surface and burn it.’

Lords and aides were looking at one another in consternation. Someone called, ‘You mean it’s a fire culture? I thought you said it was thermonuclear.’

‘Please let me get on,’ said Captain Roke. He rattled the chart. ‘The industrial waste in the atmosphere measures now in excess of a trillion tons, well beyond the capacity of dead and living things now extant there to reabsorb.’

‘A thermonuclear fire culture,’ puzzled someone at the back of the hall.

Captain Roke plowed on. ‘The upper atmosphere hydrocarbon imbalance is critical and worsening. The sulfur content has grown excessive. The heat from their star is becoming progressively more trapped by the contaminated atmosphere. Their magnetic poles are wandering.’ He sensed his audience was impatient for him to get on with it. He laid aside the chart.

‘What it means,’ said Captain Roke, putting his hands on the dais table and leaning toward them, ‘is a double threat to that planet. One: they are burning up their atmosphere oxygen at a rate that will cease to support life long before the planned date of our Invasion Timetable. Two: the planet has glacial polar caps and the increase of surface temperature, combined with wandering polar caps, could melt these and cover the bulk of their continental areas with water, making the planet almost useless.’”

Gee, what makes a bunch of nincompoops on a distant planet think they know more of our atmosphere than we do? After all, we have as many learned scientists and energy company executives here as they have. Melting ice caps? Burned up atmosphere oxygen? Cease to support life? More science fiction I think, probably…

In Volume 5, Fortune of Fear, Jet is talking to his girlfriend, stunning and equally capable Countess Krak, about the magnitude of the problem he has to handle before they can get off this planet.

“Heller looked at her a bit defensively. ‘Just now, I was listing the contemporary content of atmospheric pollutants: carbon dioxide, carbon monoxide, sulfur dioxide, hydrocarbons, nitrogen oxides and particles from various burning and industrial sources. You see, aside from making it increasingly difficult to breathe, these block the sun out. They also hold reradiated solar reflection in. One gets a heating and a cooling factor at the same time. But the planet has been warming up gradually over the last century and this is connected to increased industrialization. The main danger, however, is that these particles do not permit adequately large water drops to form and so there is an increasing scarcity of rain. Aridity is a factor in reducing life-support capability.…’”

Cooling and heating at the same time? Deserts? Just more sci-fi gobbledygook I don’t even want to think about it. Do you?

Moving ahead to Volume 6, Death Quest, Jet is reviewing plans for some really wild ideas with his Earth business associate.

“‘Oh, no, Mr. Jet,’ said Izzy. ‘I certainly would never dream of criticizing you. You wound me to think so. Besides, I maybe forgot to tell you, but when you said you were using mud electrical-breakdown for fuel, I enlarged the power plant a little bit and contracted the excess to the City of Miami Power Company for a quarter of a billion dollars a year: they use an awful lot of air conditioning there. Here’s the contracts. I forgot to mention it.’”

“Heller apparently had a lease line to Ochokeechokee and he went into a lot of chatter about some regulation they’d come up against down there about the allowable heights of stacks in swamps. It seemed that a ‘propulsion stack’ had to be at least five hundred feet high to get ‘impulsion.’

‘They’ve got to blow rings,’ he said. ‘Big green rings of spores. If they are not propelled high enough, they won’t reach the stratospheric winds. One goes every minute and if the stacks are any shorter, the perfection of the ring will foul and the resultant tumble will impede successive firings. They have to be five hundred feet tall.’ The contractor at the other end was very unhappy with Florida regulations but said that was what they said.

‘They sell sunshine down there,’ said Heller. ‘With all the soot and gases in the atmosphere, it’s getting pretty dim. Put some pressure on them. Make them see that it’s good sense to clean up the world’s air.’”

What! Clean pollutants with spores fired from stacks five hundred feet high? Even if that were possible, who on Earth is going to bother?

In Volume 7, Voyage of Vengeance, there is even more sci-fi nonsense about environmental clean-up slipped in between the spies, assassins, bankers, reporters and dishonest politicians that Jet has to deal with to get anything done on planet Earth (I have to admit that part is true).

“‘These posts,’ said Heller. ‘They’re a laser screen. They put an invisible curtain around the tanks. Nothing can get into them. The belts here take the spores up this ramp where they are dried and then they go into this hamper. At timed intervals they are blown up the stacks, reach the stratosphere and get carried by the upper winds. They clean up pollution, convert it to oxygen, and when they run out of food they perish.’”

I certainly hope no accredited environmental scientist on Earth reads this stuff cause he or she might just die laughing. And just to top it off there is this bit of nonsense:

“She looked at the book. It said The Devil’s Triangle on the cover. She looked through the index. ‘Is this another joke? I don’t see his name here.’

‘Well, no,’ said Heller. ‘Their history doesn’t really go back twelve thousand years. But if you will open the map in the front you will find some islands off the Florida coast called the Bahamas. They have electronic and radio phenomena there. Also electromagnetic disturbances. And their fathometers record a pyramid on the sea floor.’

‘Is that odd?’ said the Countess Krak.

He shot the car onto the Bruckner Expressway. ‘Not terribly. But there’s another thing reported by ships and planes: time lapses and distortions. Ships vanish. Planes fly into other time or lose time on their instruments. The only thing I know of that would do that is a very small black hole. Voltar sometimes stores them in pyramids.’

‘So I think that’s where the continent sank. I think Prince Caucalsia’s energy plants went down with it and they’re still running under the sea.’

‘And they would cause all that?’

‘Only thing I know of that would,’ said Heller. ‘Time distortions from captive black holes.’” 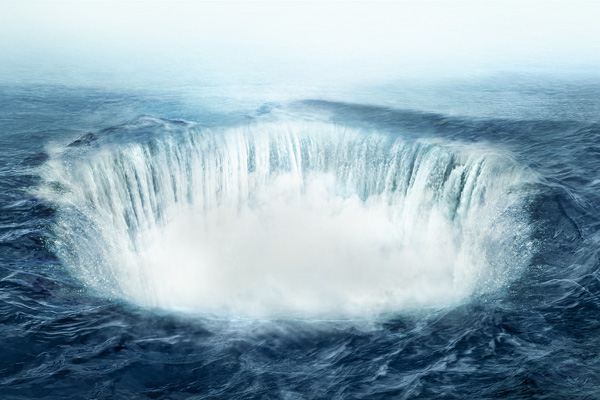 And that just proves it’s all science fiction. It might be a great story but if any scientists, environmental or otherwise, have an inkling to do so, let me save you some time with this advice: don’t bother to investigate don’t go looking for any inspiration reading between the lines of a novel you can get at any bookstore.

And don’t worry that the headlines are looking a bit to close to a few science fiction predictions. (Those never come true, or do they?) Just use the recycling bin and reusable shopping bags and everything will be all right, I think, maybe…

Possibly the Green New Deal plan for one hundred percent clean, renewable energy by 2030 (addressing the planet’s pollution) that wants to utilize carbon tax, a jobs guarantee, free college, single-payer healthcare, and a focus on using public programs will do the job?

Or, perhaps, science fiction really has had the workable solutions for a long, long time? 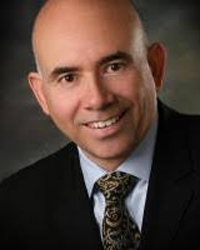 Armando Moncada is from El Paso, Texas. He has written novels such as Pancakes with a Murderer (based on a true story); a science fiction novel called The Dabu Girl. He also loves L. Ron Hubbard’s Mission Earth.

How to Celebrate St. Patrick’s Day at Home with Evergreen Audio Classics &...

Women of the West
Scroll to top