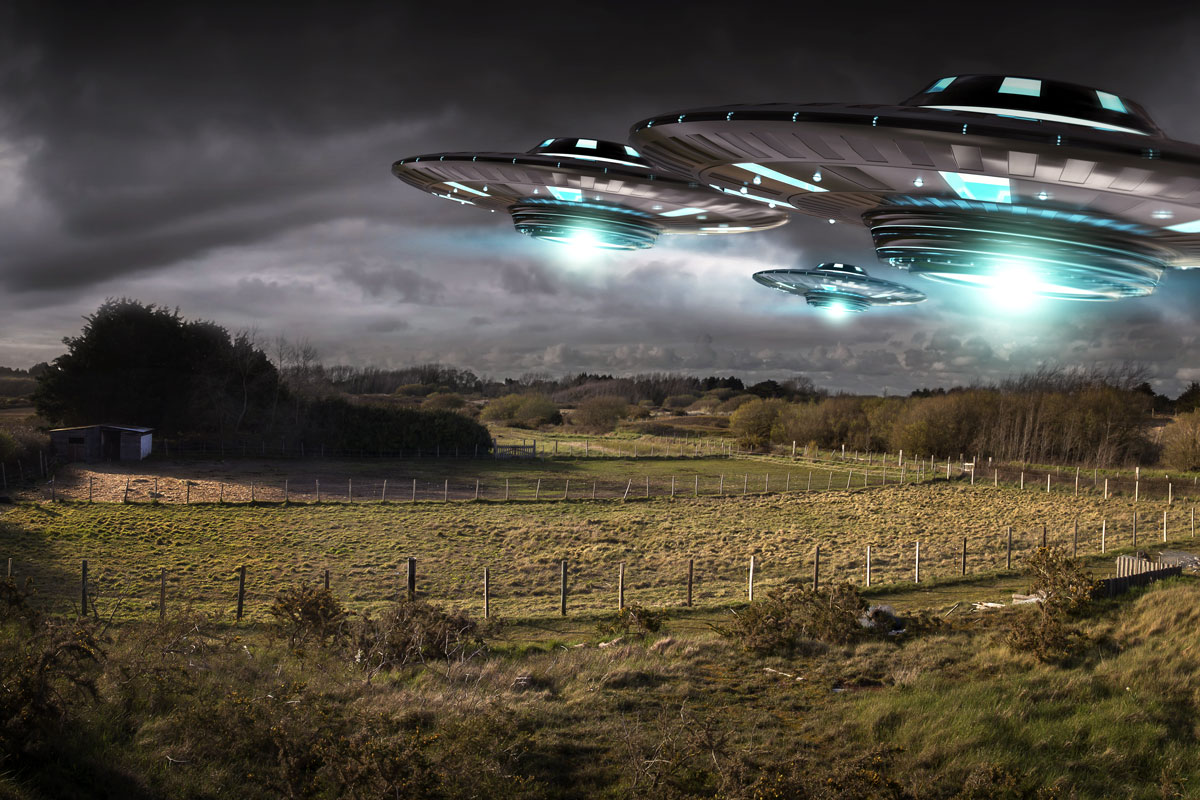 This is PART 2 of a three-part article written by Jim Marrs, the author of the New York Times bestseller Alien Agenda.

Part 2: What If They Really Exist?

Today, the topic of alien invasion is taken more seriously. A controversial book purporting to be a genuine report from the early 1960s by a “Special Study Group” connected to the federal government entitled Report from Iron Mountain on the Possibility and Desirability of Peace looked into alternatives for war, described as the principal organizing force in any society. The report concluded:

Credibility, in fact, lies at the heart of the problem of developing a political substitute for war. This is where the space-race proposals, in many ways so well suited as economic substitutes for war, fall short. The most ambitious and unrealistic space project cannot of itself generate a believable external menace. It has been hotly argued that such a menace would offer the ‘last, best hope of peace,’ etc., by uniting mankind against the danger of destruction by ‘creatures’ from other planets or from outer space. Experiments have been proposed to test the credibility of an out-of-our-world invasion threat; it is possible that a few of the more difficult-to-explain ‘flying saucer’ incidents of recent years were, in fact, early experiments of this kind.

On September 21, 1987, President Ronald Reagan echoed this view when he told the United Nations General Assembly, “In our obsession with antagonisms of the moment, we often forget how much unites all the members of humanity. Perhaps we need some outside, universal threat to make us recognize this common bond. I occasionally think how quickly our differences worldwide would vanish if we were facing an alien threat from outside this world.”

When many writers, and even a US President, talk about alien invasion, should we be concerned? According to some, there is reason for worry.

In 1952, in the wake of an epidemic of UFO sightings both in the USA and other nations including several craft overflying Washington, D.C., the US Air Force issued orders to shoot down any UFO encountered if it was ordered to land but failed to do so. Fighter pilots went on the hunt for “flying saucers” with disastrous results. There was a rash of crashes, with perhaps up to 10 fighters lost in one incident over the Atlantic Ocean. In June and July of 1952, 94 fighter jets were lost worldwide with 51 crewmen confirmed killed. Planes were falling to the ground two and three at a time in some cases. According to the New York Times, 192 aircraft vanished or crashed during the years 1951 and 1956. The crashes ceased when the shoot-down orders were rescinded. Pilots were told to simply report any UFO incident initially to their respective commanders or airline but ultimately such reports only went straight to Washington. Some have speculated this was a short-lived war with the UFOs.

Other more modern real-life incidents appear to indicate an alien aspect. It has been noticed that every time a space launch is announced with some innocuous payload, such as parts for the space station or a communications satellite, the launch seems to go off without a hitch. Yet when there is a secret launch, usually only described as military in nature, these often explode or get lost. This has prompted some conspiracy-minded researchers to suspect that the Earth nations are being prevented from placing weapons in space or detecting extraterrestrial life.

The Russian Phobos II was due to closely scan Mars and even land instruments on Mars’ peculiar moonlet Phobos (the probe’s namesake), but in January 1989, as the craft aligned with Phobos, all contact was lost. Alexander Dunayev, chairman of the Russian space agency in charge of the Phobos II, announced that the doomed probe had sent back last photos with images of a small, odd-shaped object between itself and Mars just before losing contact with Earth. There was speculation this object may have caused the craft’s loss.

This loss was repeated in 1993 when contact with the US Mars Observer was suddenly broken. It too was lost just as it entered Mars’ atmosphere. Military-trained psychics known as remote viewers claimed the Mars Observer also was disrupted by a small object which they said lifted off the Martian surface and approached the craft.

If this wasn’t strange enough, later in 1993, a Titan 4 rocket exploded at a height of 100,000 feet. While the official explanation blamed the loss on a repaired rocket motor segment, Air Force Col. Frank Sterling, the Titan 4 program manager stated an Air Force video of the launch showed an unidentified object apparently striking the Titan 4 just before the explosion.

More recently, in September 2016, the private company SpaceX’s Falcon 9 rocket being tested at Cape Canaveral in Florida exploded setting back private attempts to go into space. SpaceX CEO Elon Musk said the rocket’s explosion was “the most difficult and complex failure we have ever had in 14 years,” and added his team was not ruling out the possibility of an Unidentified Flying Object (UFO) striking the Falcon 9.

These and other space mishaps have prompted some researchers to suspect the Earth may have already been visited by entities from beyond our world who perhaps are causing such disasters in an effort to quarantine the planet due to our nuclear weapons and warlike ways.

In Part 3, Jim discusses our reach for the stars and what it may bring.

Alien Invasion: Is Earth Prepared? (Part 3 of 3)
Scroll to top