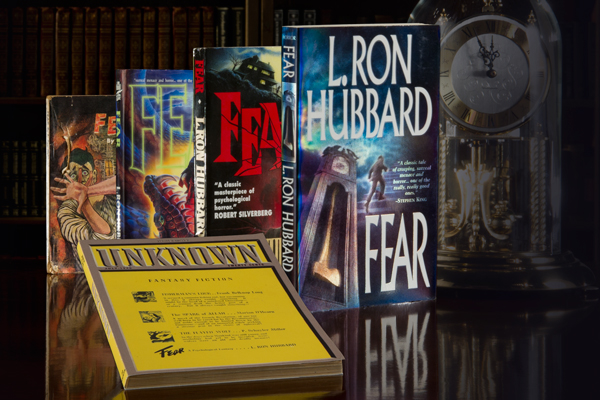 Seventy-five years after its 1940 publication, Fear by L. Ron Hubbard remains one of the foundations of the contemporary horror genre, widely influential and powerfully effective. Literary critic David Hartwell summed it up best when he wrote: “[Fear] helped to transform horror literature from an antiquarian or metaphysical form into a contemporary and urban form with the gritty details of everyday realism.”

The story, written at the request of editor John W. Campbell Jr., first appeared in the pages of Unknown Fantasy Fiction. Prior to publication, Campbell even warned his readers, “Fearhas been built of nightmare stuff. It is meant to chill the reader on any hot summer night….

Described by the New York Times as “a pioneering masterpiece of the modern psychological school of suspense and terror” and by the Atlanta Journal and Constitutionas “a story of fantasy and terror that helped pave the way for today’s style in horror fiction,” the story has influenced many contemporary horror authors.

In a letter to Hubbard, Ray Bradbury wrote, “when I was 20 years old and your Fear was published I was so impressed by it that I wrote a radio script based on it and got some friends to do some disc-recordings of it for my private listening.” Later, Bradbury would describe the story as a “true scare.”

Without the use of haunted houses, a strange location or super-psychotic protagonists, a la Freddy Kruger or Norman Bates, the author takes the reader on a journey with respectable professor James Lowry, an ordinary man, in a very ordinary circumstance, and leads you into a completely plausible but extraordinary hell.

As World Fantasy Award-winning author Tim Powers put it, “Hubbard didn’t need werewolves and bloody axes—he could scare the daylights out of you with a hat, or a stairway, or a little boy sitting on a rock and scratching his initials in the dirt with a stick. Fear is a terribly powerful story.”

Horror writer Edward Bryant admitted, “When I was a kid it was the first psychological horror fiction I ever read and it had a tremendous effect on me. It scared the very devil out of me. It made me leery of ever going down to the basement again.” Master of modern horror classics himself Stephen King describes it simply as, “a classic tale of creeping, surreal menace and horror. If you’re not averse to a case of the cold chills—a rather bad one—and you’ve never read Fear, I urge you to do so.”

But, be warned. As the author admonishes in his introduction: “There is one thing which I wish the reader could keep in mind throughout, and that is: this story is wholly logical, for all that will appear to the contrary. It is not a very nice story, nor should it be read alone at midnight—for it is true that any man might have the following happen to him. Even you, today, might lose four hours from your life and follow, then, in the course of James Lowry.”

Zombies—Fact or Fiction?
Scroll to top