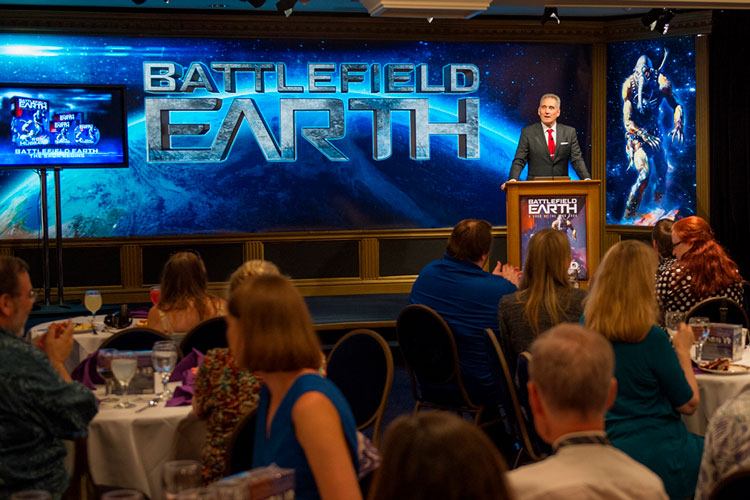 Galaxy Press has officially announced the upcoming new release of the mass market paperback edition of L. Ron Hubbard’s international bestselling novel, Battlefield Earth: A Saga of the Year 3000 at Dragon Con, over this coming Labor Day weekend. The announcement was made by Galaxy Press president John Goodwin from his offices in Hollywood in preparation for the upcoming Book Expo America taking place next week in New York City.

With over 4 million copies sold, Battlefield Earth is one of the all-time bestselling science fiction novels having made more than $40 million for the publishing industry. Its re-release last summer as a trade paperback book and unabridged audiobook with the Frank Frazetta cover art saw both editions top the bestseller charts at #1 for trade paperback, audiobook and science fiction, all in the same week.

“Fans have asked for a mass market paperback edition and we are delivering,” stated Goodwin. “Based on the success of the paperback, we know there are a lot of fans out there and we plan to make it available everywhere we can.”

Battlefield Earth has been voted among the top three of the best 100 English language novels of the 20th century by the Random House Modern Library Readers Poll, and has won worldwide critical acclaim, including the US Golden Scroll and Saturn Awards, Italy’s prestigious Tetradramma d’Oro Award (for the story’s inherent message of peace), and France’s Gutenberg Award for the novel’s exceptional contribution to the genre.