“Boos and Taboos” by L. Ron Hubbard: L. Ron Hubbard challenges the restrictive “taboos” of writing for publications that bind stories in formula straitjackets. Urging writers to flout by-prescription storytelling, he describes his own conspicuous success in doing that, with a final, telling reflection on creative energy, sales—and writing stories that will be remembered.

“Teamwork: Getting the Best Out of Two Writers” by Brian Herbert & Kevin J. Anderson: Together, Brian and Kevin have written over twenty novels and numerous short stories, primarily expanding Frank Herbert’s Dune universe, but also on their original SF epic, the Hellhole Trilogy. Here they share the pitfalls and successes of their process and how they make it work.

“The Third Artist” by Diane Dillon: Leo and Diane Dillon chose to blend their talents, working together as one artist—the third artist—beginning a career that spanned fifty-four years. As an interracial couple, they dedicated their career to be inclusive of all races and cultures to reflect the world we live in.

“A Word of Power” by David Farland: When Fava, a Neanderthal shaman, discovers the men of metal driving away her mammoths, she must find magic powerful enough to save the herd.

“The Daddy Box” by Frank Herbert: An abused boy finds an alien artifact that gives him the strength to reshape his life and stand up to his violent stepfather.

“Agatha’s Monster” by Azure Arther: In a world where monster killing and trapping is big business, one girl from a Hunter family decides she won’t kill monsters. As a matter of fact, her best friend is one.…

“The Magic Book of Accidental City Destruction: A Book Wizard’s Guide” by Z. T. Bright: A “book wizard” wants to help a pair of young orphaned brothers repair their relationship. But a powerful new magic book with problematic spellwork stands in the way.

“The Squid Is My Brother” by Mike Jack Stoumbos: The daughter of Neptune Station’s greatest hero is about to face her most daunting mission yet: elementary school on Earth.

“Gallows” by Desmond Astaire: A bartender with a vendetta against the future must determine if his customer is a time-traveling tourist.

“Lilt of a Lark” by Michael Panter: A disgraced Lark is forced to take the job nobody wants. His songs can sway minds, but there’s no margin for mistake in the frozen north.

“The Mystical Farrago” by N. V. Haskell: When a lieutenant with a mysterious past discovers an exotic creature held captive
by a travelling farrago, they must decide how far they will go to save what matters most.…

“Tsuu, Tsuu, Kasva Suuremasse” by Rebecca E. Treasure: Alone but for her grandchild and a fox spirit, Emily braves Russia’s winter and Napoleon’s army to keep her family alive … and together.

“The Island on the Lake” by John Coming: A son must decide whether to follow his father’s footsteps and accept a responsibility he doesn’t understand.

“The Phantom Carnival” by M. Elizabeth Ticknor: When a desperate bid to recover stolen memories goes wrong, Alice must decide how far she’s willing to go to protect her best friend.

“The Last Dying Season” by Brittany Rainsdon: A botanist must cure a dying planet before an evacuation when she will be forced to leave her young daughter behind.

“The Greater Good” by Em Dupre: Technology suppresses crime on the generation ship Eudoxus, until a body is discovered threatening the years of peace.

“For the Federation” by J. A. Becker: A genetically engineered assassin, concubine, and bodyguard has to unravel the entirety of her being to save her son.…

“Psychic Poker” by Lazarus Black: Tyson doesn’t need to be psychic to know the invitation is a trap, but he can’t refuse a poker tournament with the highest stakes imaginable.

“Reading a Writers of the Future volume is like looking at the desert after the rainstorm—suddenly, when you least expect it, you’ll see an explosion of color and life in an amazing variety.”
—Kevin J. Anderson

“There’s only one reason to pick up Writers of the Future, and that’s because the stories are wonderful.”
—Orson Scott Card

“L. Ron Hubbard ignited the spark of imagination, which in the minds of these new artists has become a blaze.”
—Bob Eggleton

“The benefit of the Writers of the Future Contest is not only to individuals; it is to the community of SF writers as a whole, for such a program elevates the quality of SF writing by bringing on board talented future professionals.”
—Brian Herbert

“I’m very happy to be able to lend my help to the Writers of the Future program. The more good writers there are, the more good readers there will be. We’ll all benefit‍—writers and readers alike!”
—Frank Herbert

“Writers of the Future is the gold standard of emerging talent into the field of science fiction fantasy that has contributed more to the genre than any other source.”
—Midwest Book Review

“Some of the most excellent speculative fiction that you can find anywhere. They’re cutting edge. They’re new.”
—Nnedi Okorafor

“From cutting-edge high-tech to evocative fantasy, this book’s got it all.”
—Tim Powers

“These are the people who are going to be creating trends.”
—Brandon Sanderson

“The Illustrators of the Future is an amazing compass for what the art industry holds in store for all of us.”
—Dan dos Santos

“See the best of the best culled for you, curated and selected in a single volume every year.”
—Robert J. Sawyer

“Writers of the Future is always one of the best anthologies of the year.”
—Tangent

“It’s an honor to present these amazingly talented individuals and their wonderful work in this anthology.”
—Tom Wood 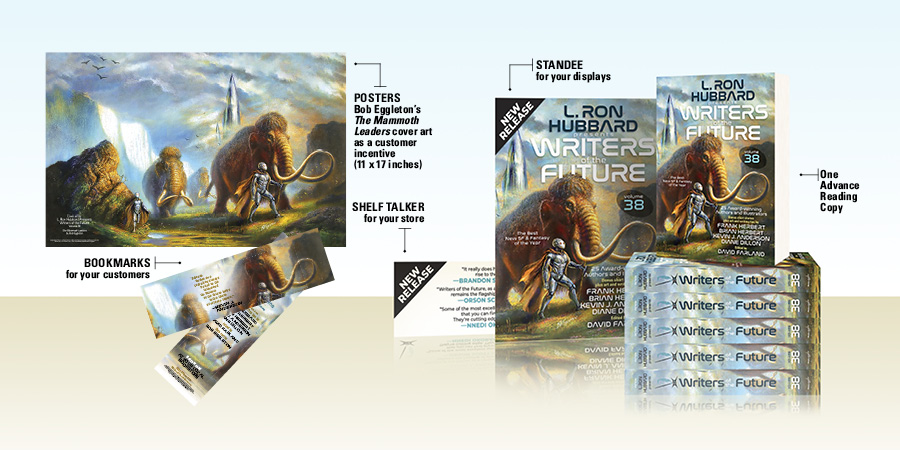 Edelweiss catalog: Writers of the Future