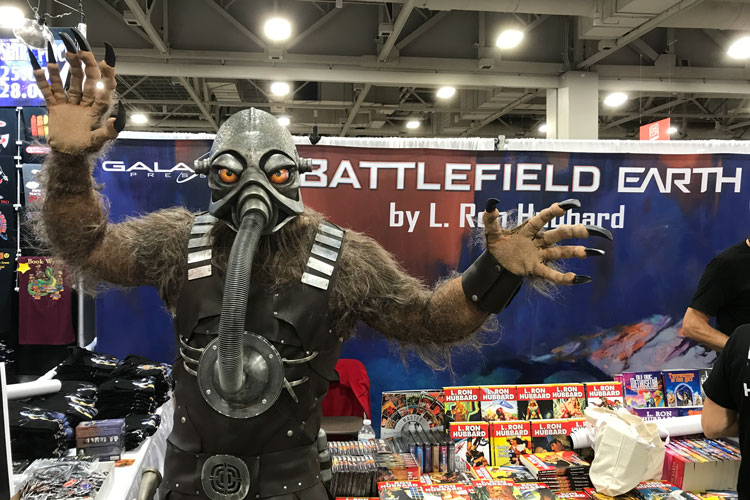 “He is big and intimidating. Some shy away from him in fear and others come right over and fist bump him,” said John Goodwin, President of Galaxy Press. “He is here promoting the new edition of Battlefield Earth. This has been a great event for us and we have been very welcome by all the Comic Con fans.”

Salt Lake Comic Con was attended by over 100,000 science fiction and fantasy fans over the weekend where Galaxy Press attended to release the new mass market paperback edition.

The new edition of Battlefield Earth features discussion guides and cover art by legendary artist Frank Frazetta and an exclusive interview with L. Ron Hubbard. The book was originally published in 1982 where it first became a New York Times bestselling novel.

Since its initial release in 1982, Battlefield Earth has sold over 4 million copies and was rated #3 of the top 100 novels of the 20th Century in the Modern Library Readers Poll. This new edition has expanded content containing an author interview published in the Rocky Mountain News shortly after the book’s initial release and a Discussion Guide. The Battlefield Earth book is now available at Amazon, Barnes & Noble, Books-a-Million and wherever books are sold. For more information go to www.GalaxyPress.com. https://www.Facebook.com/BattlefieldEarth https:///www.Twitter.com/BE_the_Book