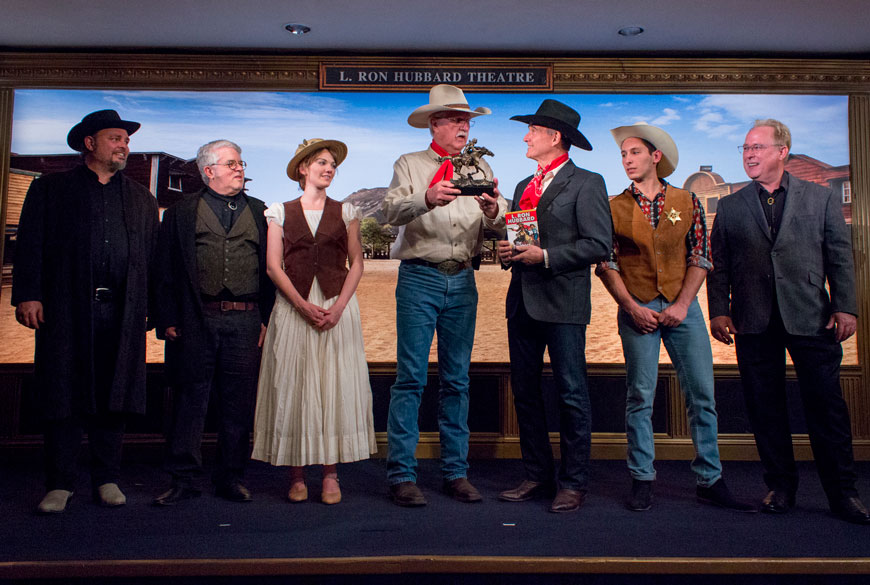 Chronicle of the Old West Acknowledges L. Ron Hubbard on 80th Anniversary of “The Toughest Ranger”

The celebration of the 80th anniversary of “The Toughest Ranger” (1938 – 2018) was held at the L. Ron Hubbard Theatre live performance of the western tale before a packed house. Directly following the show, Dakota Livesay, publisher of The Chronicle of the Old West newspaper and syndicated radio show, was invited to the stage where he presented a bronze statue to L. Ron Hubbard in recognition of the anniversary.

On the base of the statue was an inscription which Dakota read out loud while making the presentation, “As a legend of the old west, L. Ron Hubbard exemplified Living the Code of the Old West with his tale that captured both the persona and spirit of America’s last wild territory and the men who made its statehood a reality-the Arizona Rangers.”

“The Toughest Ranger” was published in the June 1938 edition of Western Story Magazine and tells the story of gun-shy cowboy Petey McGuire, who has been kicked around all his life. Faced with starvation, he bluffs his way into a job with the rough-’n’-tumble Arizona Rangers. But when he’s chosen to hunt the most dangerous desperado in the state, Petey’s forced to discover what it really means to be Ranger-tough.

L. Ron Hubbard grew up in turn-of-the-century Montana and loved the West and understood the tradition and spirit of the frontier that had infused the daily life of his childhood. His familiarity with the West went beyond his early adventures. He was also a dedicated student of the folklore and folkways of range riders and homesteaders, of Indian tribes and their turbulent pasts, of frontier towns and of the people who had crossed a continent to build them, and of the legends that lingered around them long after the original settlers were gone.

It was his fascination with the frontier and his immersion in its history and culture that were the foundation for thirty-eight taut tales of the American West that appeared in virtually every pulp magazine of consequence for the better part of two decades, writing under such names as Barry Randolph, Ken Martin, Winchester Remington Colt, all in addition to his own name.

For more information on the western stories written by L. Ron Hubbard, go to http://www.GalaxyPress.com/westerns

Jim Marrs Discusses: Is Earth Prepared for an Alien Invasion?
Scroll to top