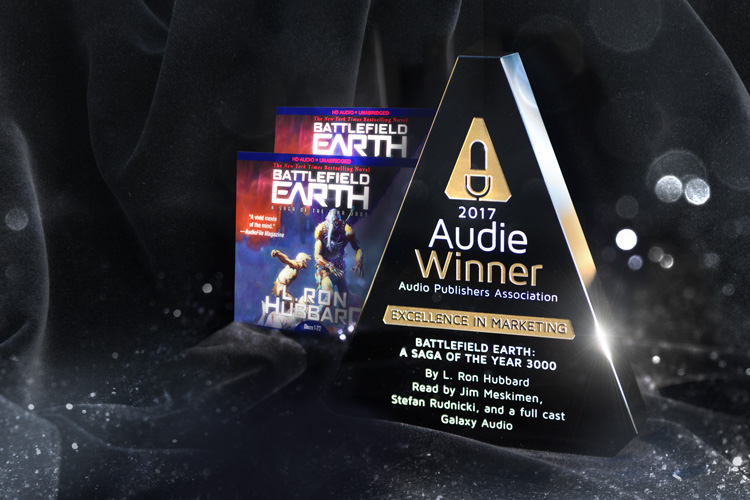 “The audiobook continues to be popular over a year after releasing it,” said John Goodwin, President Galaxy Press. The audiobook was reported to have been a year in the making where Galaxy Press hired on 67 actors to play nearly 200 parts and used over 150,000 sound effects on the 47.5 hour audiobook. This comes at a time when post-apocalyptic novels have been skyrocketing such as: The Hunger Games, World War Z and The Handmaid’s Tale, of which the recent Hulu adaptation just won several Emmy Awards.

Reviews on Audible.com for the Battlefield Earth audiobook include bold statements, such as:

“Battlefield Earth is the best Science Fiction story ever written. Period! I have read the book every year for 24 years since I first discovered it. And, now, this is no ordinary narrated audio version of the story – it is a virtual Theater of Sound!” – Amazon Reviewer

The Battlefield Earth audiobook was named Best for the Year in Science Fiction by AudioFile Magazine and also won the famed Audie Award. You can here a clip on SoundCloud.

Since its initial release in 1982, Battlefield Earth has sold over 4 million copies and was rated #3 of the top 100 novels of the 20th Century in the Modern Library Readers Poll. This new edition has expanded content containing an author interview published in the Rocky Mountain News shortly after the book’s initial release and a Discussion Guide.

The Battlefield Earth book and audiobook are now available at Amazon, Barnes & Noble, Books-a-Million and wherever books are sold. For more information go to www.GalaxyPress.com. https://www.Facebook.com/BattlefieldEarth https:///www.Twitter.com/BE_the_Book