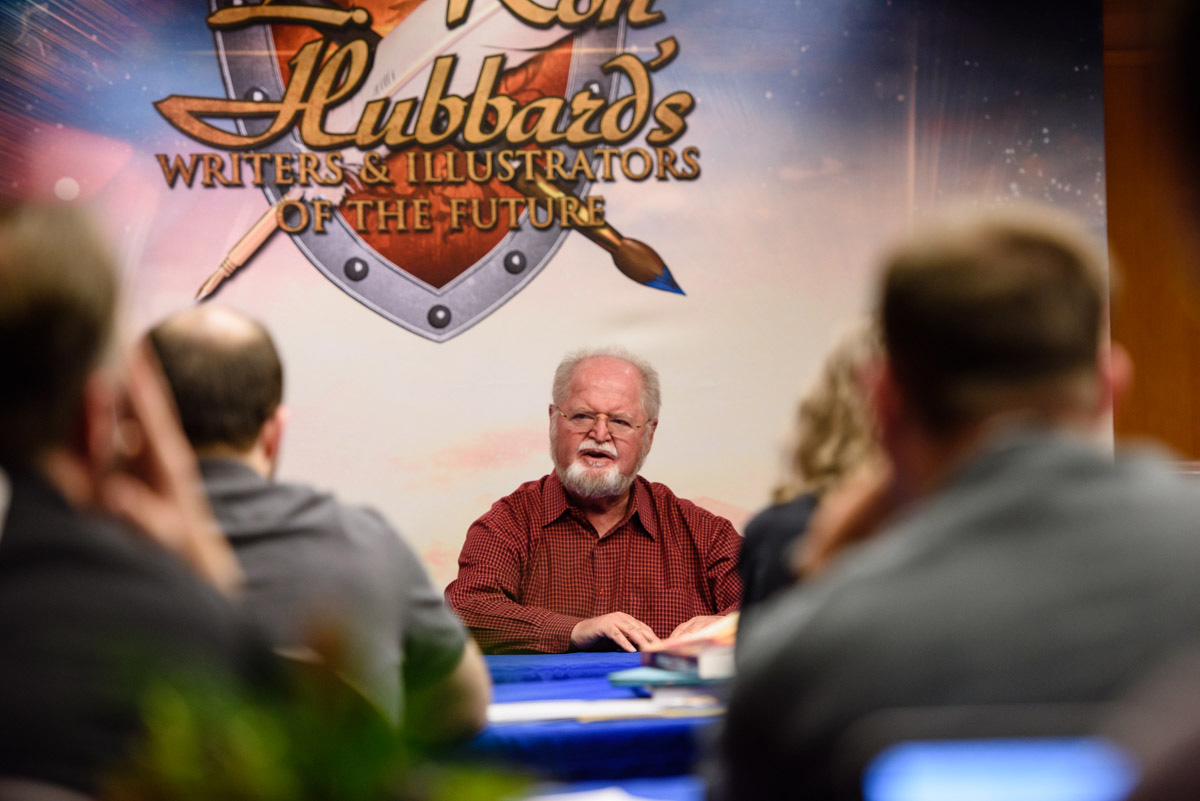 Writers of the Future Workshop – Day 6

Saturday is essentially a “Cavalcade of Stars.” For the winners, this means that today they don’t have to go anywhere except the classroom, but about every hour or so a new judge stops by to give them something new to think about (luckily, the brains of the winners are infinite storage cells for all the stuff that’s going on).

Nina Kiriki Hoffman starts the morning out with a fun exercise for creating idea, which gets C.L. Kagmi (3rd place, Q3) pumped. “I loved that exercise,” she said. She has this great idea, now, you see, but she has a problem: All she wants to do is go writer, but there’s a whole day’s worth of learning to sit through. Somehow, she manages. I can’t wait to see what she comes up with, though. Very little is more fun to see than a writer with an idea burning in her mind.

Doug Beason was next up. He talks about focusing on characters and relationships in science fiction. “It’s not good enough to just put cool technology and ideas into pieces anymore,” he says. Nancy Kress and I have a little conversation about this in the cracks of the session. My own little pin on this kind of thing is that, as time moves forward, what used to be considered harder science fiction has turned into contemporary fiction. But then, what do I know, right? Doug spends thirty minutes answering questions that range from the use of metallic hydrogen to the kinds of programs available to get kids interested in space.

Then the group gets to sit with Nnedi Okorafor, who starts by asking “what do you want to hear from me?” and then spends the next 45 minutes answering non-stop questions. She discusses her own journey to becoming a professional writer—which is a topic almost every new writer I know loves to hear. The paths we take are all so different. I mean, there are similarities, of course, but it helps to hear that there is no one “right path.” She talks about writer’s block—or at least why she doesn’t believe in it. “When things aren’t coming, I’m not blocked. But I know I just have to wait. It always comes.” I love this thought pattern. This was an energetic conversation that would probably still be going if Tim Powers hadn’t kept a semi-firm handle on the agenda!

And the highlights keep coming.

Next up is Jerry Pournelle, and then Larry Niven. It’s clear to me that there are more than a couple of our winners who are doing their best not to go into full-out fan mode. Jerry talks about the difference between being an author and being a writer, coming back to that point often, but focusing on the work. “Concentrate on the story,” he said. Larry spent most of his discussion on the act of collaboration. He talked about respecting the other writer, and he talked about matching skillsets. Both he and Jerry talked about using each other’s strengths while creating their stories together.

Then came a session with six past winners including Megan O’Keefe, Laura Tom, Steve Pantazis, Martin Shoemaker, Kary English, Brennan Harvey, and myself. As might be expected with seven voices, the result was a scatter-shot of ideas that were all primarily focused on what happens next. Megan passed around an approach to story structure, and everyone picked out things that struck us as valuable to think about as the winners go home. Questions came in about web presences, how to use critique groups, how to deal with an audience and the pressures that come from having a bit of notoriety. Among others.

Since I participated directly in this session, I found myself looking around the room and thinking of the people I came to the program with back in volumes 14 and 15. Amy Casil and Scott Nicholson were at the forefront. Jim Hines, Steve Mohan, Jason Schmidt. I was remembering Carla Montgomery, who helped me title “Stealing the Sun.” Stephano Donati and Franklin Thatcher, who were my roomates. Don Solasan. Bill Rowland, Scott Huggins. I could go on, but this isn’t meant to be about me, right? (too late, I hear you say, too late!)

Much of the conversation focused on this new community that these winners are stepping into. And it is a great community. But I wanted them to look around the room now and realize that this is their class. These are the people who can still be around year after year. “These are your people,” I tried to say at the end of the session.

And that was that.

Except, of course that since this is Writers of the Future week. There’s always more to do even when the workshop comes to a close.

Next is a session for Q&A on the award ceremony, then a break for dinner, and finally a trip to the Wilshire Ebell Theatre for a rehearsal.

I think the gang is ready.

Here’s the link to the photos for the day.

Illustrators of the Future Workshop 2017 – Day 5

Writers & Illustrators of the Future Awards Event 2017
Scroll to top