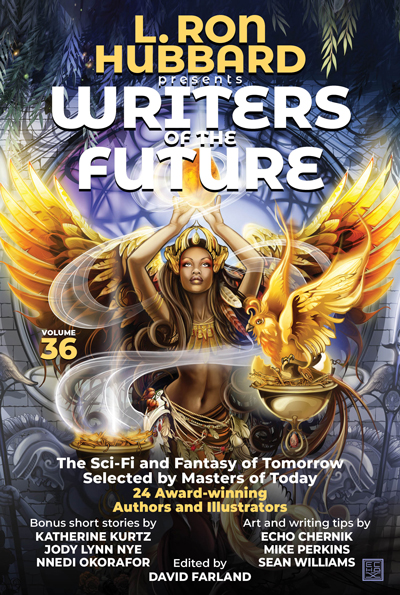 “This hefty, competent anthology showcases 12 consistently solid short stories, each accompanied by a full-color illustration. A worthwhile survey of new voices in the field, rounded out with four stories from established authors and three essays on craft. Genre enthusiasts should take note.”

“This hefty, competent anthology showcases 12 consistently solid short stories, each accompanied by a full-color illustration. A worthwhile survey of new voices in the field, rounded out with four stories from established authors and three essays on craft. Genre enthusiasts should take note.”

“Borrowed Glory” by L. Ron Hubbard: For a single day of glory and the settlement of a dispute among immortals, a life can be a satisfactory price.

“The Green Tower” by Katherine Kurtz: The magic is strong in the Green Tower, and two young girls struggle to discover its secrets.

“The Phoenix’s Peace” by Jody Lynn Nye: The Phoenix has always been the guardian of Dembia. Now there’s trouble in the land, and mysteriously, the Phoenix has left two golden eggs.

“Steps in the Right Direction” by L. Ron Hubbard: In this interview, Ron describes the practical philosophy and energetic disciplines he applied with such telling success to his own career as a professional author.

“Breaking In” by Mike Perkins: Marvel and DC artist for Captain America, Thor, and Spider-Man shares valuable advice for anyone wanting to make it as a professional artist and illustrator.

“Making Collaboration Work for You or Co-writing with Larry and Sean” by Sean Williams: New York Times bestselling author, provides insight on the pitfalls and advantages of collaborating with another author.

“Writers of the Future has my heartiest support and unqualified recommendation.”
—Terry Brooks

“Writers of the Future, as a contest and as a book, remains the flagship of short fiction.”
—Orson Scott Card

“L. Ron Hubbard ignited the spark of imagination, which in the minds of these new artists has become a blaze.”
—Bob Eggleton

“Some of the most excellent speculative fiction that you can find anywhere. They’re cutting edge. They’re new.”
—Nnedi Okorafor

“Without Writers of the Future, I wouldn’t be where I am today.”
—Patrick Rothfuss

“These are the people who are going to be creating trends.”
—Brandon Sanderson

“The Illustrators of the Future is an amazing compass for what the art industry holds in store for all of us.”
—Dan dos Santos

“Packed with brilliant stories and thoughtful essays, all wonderfully illustrated by the artist winners—always a joy to behold.”
—Robert J. Sawyer

“A Word That Means Everything” by Andy Dibble: How does one interpret the word of God so that an alien can understand?

“A Prize in Every Box” by F. J. Bergmann: The cereal-box toy looked like a TV remote, but the children discovered that it could fix anything, heal anyone—or change everything.

“As Able the Air” by Zack Be: On the outskirts of a war zone scarred by endless conflict, a lonely landmine decommission expert struggles to connect with his nonhuman partner.

“Automated Everyman Migrant Theater” by Sonny Zae: Robo actors over-step their marks to win a spot in the Moto-Odeum theater tour and save their troupe.

“Catching My Death” by J. L. George: Whether you catch a good death or a bad one determines the course of your life, unless you find a way to break free of the cycle.

“Educational Tapes” by Katie Livingston: Know there is nothing here to harm you. Only your choices. Only yourself. The educational tapes will prepare you for your choice, “I accept” or “I decline.” There are no other options.

“Foundations” by Michael Gardner: A house is supposed to protect its family, not turn on one of its own.

“Molting Season” by Tim Boiteau: An alien invasion leads to a suicide epidemic on Earth, and years later one of the survivors, a hotel clerk, struggles to make sense of the events and reconnect with the world.

“Stolen Sky” by Storm Humbert: An artist leaves her homeworld to perform for humans across the galaxy, but finds that everything the humans have given her people may pale in comparison to what they’ve taken.

“The Trade” by C. Winspear: An alien visit to the International Space Station to provide a potential solution to climate change, for a price!

“Trading Ghosts” by David Elsensohn: A guilt-ridden cargo captain on a remote mining colony decides to help a fallen angel who desires to die.

“Yellow and Pink” by Leah Ning: Nathan Reed steals the opportunity to repeat his life and prevent his wife’s untimely death.