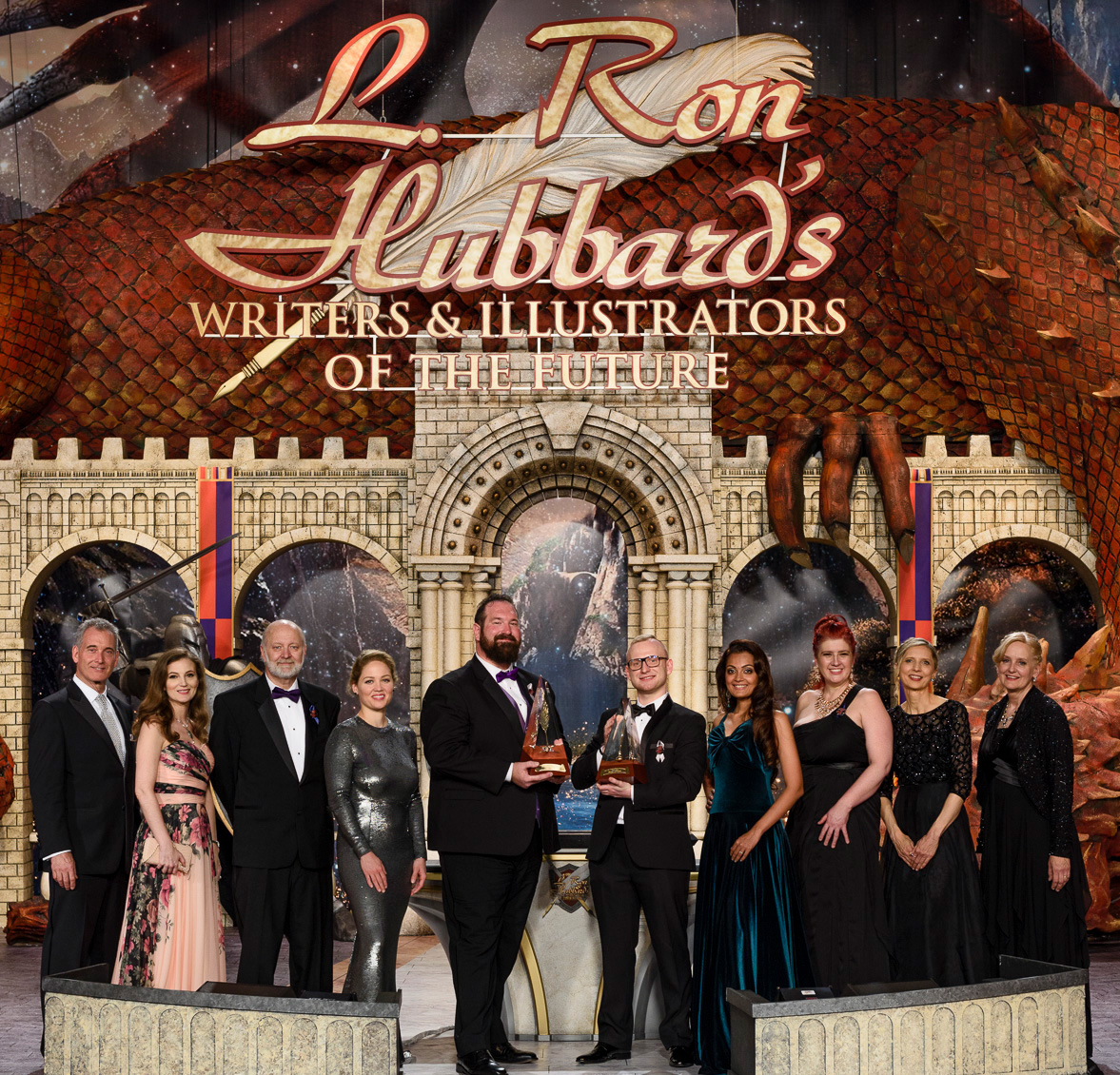 This is, of course, the day of the achievement awards ceremony. It’s held at the Wilshire Ebell Club Theatre, which is an amazingly cool place.

At one point, a little later in the night, I found myself standing in the big room where the final book signing would be held. The gala event was over, but the winners had not yet arrived. The room, therefore, was fairly quiet. Just a few people milling around. In an adjoining room, there were several tables covered with newly released copies of Writers and Illustrators of the Future, Volume 33 all waiting to be signed. Other tables had drinks on them, and still, other tables were covered with trays of food. But the tables I was looking at were a large collection in the middle of the room, each placed together to form a rectangle.

Inside the rectangle, there were fourteen chairs (five to each long side, and two to each short side), facing out. Each table was covered in a tablecloth of pale gold, and in front of each chair sat a blue pen. The pens seemed to be locked and loaded, lined up in perfectly regimented order. In just a few minutes the winners would arrive, take these seats, and begin to use these pens to sign books. But right then everything was quiet and stable. A calm before the storm.

This “calm before the storm” is how I’m feeling about this year’s class of winners. Their book is ready to launch, as—for many of them—are their writing careers. I can feel that storm brewing within this group. I can’t wait to see what this gang does.

In the meantime, I suppose I should go back in time a bit. (Everything about the Writers f the Future is focused on science fiction and fantasy, right? I figure I’ve got some leeway to let time travel happen here, so I’m going to take it).

Earlier this morning, the winners had been quiet and subdued. I walked over to ASI, to take in the hair and make-up process going on. Along the way, I spied three of the guys having a quiet conversation in the hotel lobby. Two others were at a Starbucks, sipping coffee and having a quiet conversation. They all had speeches to deal with, and in the end, they would all deal with those speeches beautifully. But in the morning, it seems to be a little stressful.

I watched Molly Atkins and C.L. Kagmi get their makeup done. I chatted with Ziporah Hildebrandt as she was waiting her time in the seat. Family members of Molly and Ziporah came into town, and I got to chat with them for a while. This was great fun. After a whole week of watching the winners go about their work, seeing their kids, parents, and other significant others was a special treat.

Before too long, it was time to travel to the Wilshire. We piled into a bus and headed off. Conversation throughout the ride was lively. Jake Marley and Stephen Lawson chatted up a storm. I asked about their previous experience with speaking in groups, both had some but Stephen took the lead due to his work in the military. When we arrive, the winners got their pictures taken, and made their way down the red carpet, and had a series of fantastic interviews.

The thematic element of the event this year is the red dragon, painted gloriously be renowned artist Larry Elmore. This means the red carpet is decorated with the head of a red dragon and patrolled by a knight in shining armor. Families and visitors took seats, and the event began.

Bottom line: this ceremony was huge when I was last here in the late 1990s. It was loud and raucous, and a lot of fun. Those events paled, however, in relationship to what it is now. This is a huge presentation. Contest judges Rob Prior and Larry Elmore kicked off the festivities by painting a dragon together as a trio of fire dancers kept the audience entertained. Then came an overview of L. Ron Hubbard and the contest itself.

Mike Resnick received a lifetime award and give a speech about his writer children and how he has always nurtured new writers. As one of his earlier writer children, I can completely confirm this…watching Mike get this award was a highlight of my week. Mike’s efforts to help new writers over the years dovetail perfectly with this contest, a fact that was represented by the rows of past winners I was sitting with who had all been published in or with him. Of course, his speech was fantastic.

Then Pat Henry, co-founder and President of Dragon Con gave a lively dissertation about fandom, the convention, the value of fantasy and science fiction, and dragons as a whole.

So, yeah, the early part of the show was great fun, but the time had now come for the presentation of the awards. I could easily put myself in the winner’s shoes and realize that they were probably getting more nervous as time went by. As David VonAllmen said, there may well have been 1200 people in the building, but there were millions more looking in on the Internet. No pressure, right?

Anyway…the winners’ talks may well have taken forever to get here, but they started off with a bang when Anton Rose gave a fantastic speech for his story “A Glowing Heart.” From this point on, winner after winner came to the stage and made brilliant moments. Perhaps the most powerful speech came from a writer who wasn’t even here. Walter Dinjos, a Nigerian winner (for “The Woodcutter’s Diety”) sent a beautiful video from his home in which he thanked L. Ron Hubbard and the contest and went on to note how he missed being with his writer class and would be looking forward to finding them as their careers unwound. Afterward, Larry Elmore, who was presenting the illustrator’s award, paused, looked out at the audience, and said “That was a moving video. You can tell he has the same heart as the rest of us.”

Yes, indeed you could.

And, yes, there was moment after moment for the winners, culminating in the announcement of the illustrious “Golden Pen Award,” the top achievement in the contest in which the judges selected a grand prize winner from the top four winners of each quarter. This year the candidates were Dustin Steinacker’s “Envoy on the Ice,” Doug Souza’s “The Armor Embrace,” Andrew Peery’s “Useless Magic,” and Jake Marley’s “Acquisition.”

When Jake’s name was called, pandemonium broke out. There was screaming and laughing and joyous crying—and that was just from Jake! The rest of the crowd, including this fantastic set off on a round of thunderous applause as he bounded down the aisle, hugging his friends and receiving big claps on the back. To say the least, this was a very popular winner. Jake gave a beautiful acceptance speech. At one point the screen flash on his beautiful wife and daughter smiling, with tears in their eyes, literally unable to hold still. Later I would speak with one of them and she was effervescent. “I’m so proud of him!” she would say, literally glowing as she held a copy of the book to her chest. “He’s been gone at the Writers of the Future for so long and I haven’t seen him or hugged him until today and I’m so proud of him I can hardly even finish my sentences and I’m so ready to burst.”

Which brings us full circle to the book signing.

The winners arrive and take their seats. Books are purchased, and the signing commences. I wander around in the background, watching as the lines of people walk through and the writers talk to each of them as they personalize the books. It’s a long process. Past winners Megan O’Keefe and Laurie Tom are there, making sure the writers always have water, which is considerably more important than they might have thought before going through this. It’s hot there, you know? The lights are on, and the people move by, and you’re talking all the time, which means your voice gets dry. Water is a big deal at a signing. Consider this lesson number 10,058 of the Writers of the Future week.

The winners pile into busses, get back to the hotel, put on their everyday duds, and head to the after-party to chat, sign each other’s books, have a little snack, and basically just decompress.

It’s nearly 3:00 by the time I get back to the room and shut off the light.

But, who is minding the clock, right? This Writers of the Future thing is all about fantasy and science fiction.

Time is our plaything, and tonight it’s on the side of these 14 amazing winners.

For a glimpse of how the day transpired, click HERE.

Writers of the Future Workshop – Day 6