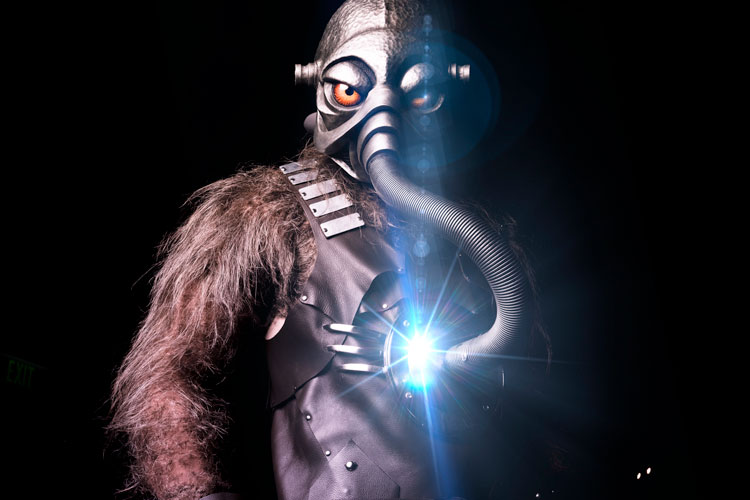 The Psychlos of Battlefield Earth – Terl

“We think nothing of going into an area and taking out minerals at the expense of the plant and animal life. So what would it be like if an advanced race of aliens viewed the entire planet of Earth in the same way?

“Now the prospect of something like this actually happening has always been laughed off as ‘fiction.’ But so has everything else SF writers took up—television, the atomic bomb, space travel—you name it.

“An analogy might be if someone had tried to warn the American Indians that this white race would come in with sticks that blew fire and that could wipe out the great buffalo herds. The Indians would have laughed at him.

“Am I saying an alien invasion is possible?

“I am saying that the reader should decide.

Terl is the current Psychlo security chief for planet Earth, of which the Psychlos have been mining for the past 1,000 years. He was a product of the “mental doctors,” referred to as “catrists,” from the planet Psychlo.

The author explains the history of the catrist. “Members of this band of cutthroats began to call themselves ‘catrist.’ That means ‘mental doctor.’ So the people became Psychlos or ‘brains’ and the ‘catrist’ or ‘mental doctor’ was the real, hidden government. They taught all the children. They inspected every citizen. They suppressed religion. They told people how to think.”

Terl was what they referred to as a “brain-brain.” “Darling of the catrists. Trained in every branch of anything. Sly, evil. A true catrist product.”

Terl’s most striking characteristic is his constant need for leverage to control people as in this scene:

To better understand just how the race of Psychlos came to be, I have excerpted a section out of Battlefield Earth to explain their history—it also introduces the only race capable of controlling the Psychlos (but that will be the subject of a separate post). This is an explanation made by Intergalactic Bankers Dries and Lord Voraz to Jonnie Goodboy Tyler.

“We have about five billion inhabitants on each planet,” continued Dries, “and it is quite a busy population. Although mostly devoted to banking, we have, of course, our engineers and specialists and, naturally, lots of mathematicians. Nearly five hundred thousand years ago we developed space flight. That’s about the right figure, isn’t it, Your Worship?”

Lord Voraz was still a bit out of sorts at the idea of planets going back on obligations. But he put a good, professional banking face on it. “Four hundred ninety-seven thousand, four hundred thirty-two years this coming sidereal Day 103 for this universe,” he said.

“Thank you,” said Dries, having gotten His Worship back into the discourse. “And three hundred two thousand years ago—”

“Thank you. . . . We ran into the Psychlos! Now, don’t be alarmed. We were not conquered. We didn’t even fight a war. In those days the Psychlos were not as bad as they became about a hundred thousand years later. In that time, they had not begun killing for the love of it—I’m sure I don’t have to go on to you about Psychlos.”

“No indeed!” said Jonnie. This was all going somewhere that was going to wind up as bad news. He could feel it despite their smiles.

“Precisely,” said Dries. “Where was I? Anyway—and this will amuse you—they were not interested in us really, for we did not have any metals to amount to anything. Being mostly water, our planets would have presented formidable mining problems.

“We needed metals and the Psychlos needed some computer technology we had, and so we became a market. This was something brand-new in Psychlo experience. They had a lot to learn about finance and that sort of thing. So we taught them.

“Internally, they were pretty bad off. They breed like . . . what’s some fish of this planet you’d know . . . like herrings! They have always been terrified of founding actual Psychlo colonies for fear they’d rise and revolt against the home planet. They had mobs and unemployment. Heavy, heavy depressions. They were an economic mess.

“So we helped them build markets for metals. With their teleportation shipping arrangements, it was very easy for them to do this. They became prosperous and developed even more ways to mine and we saw to it they were economically stable.

“Then suddenly, from the Psychlo viewpoint, an awful thing happened. It terrified them.

That was about two hundred thousand years ago.”

“Thank you. Another race stole or invented teleportation!”

“It is unclear what happened then,” said Dries. “We don’t always have access to military files and we never had access to these, not ever. But I think the Boxnards tried to put teleportation to military use. The Psychlos got there first and the entire seven planets of the Boxnards and every single Boxnard were wiped out. It took the Psychlos years.”

“They even slaughtered people and races which had been associated with or allied with the Boxnards, for we never afterward found any trace of them.”

“That war,” said Dries, “also seemed to change the Psychlos. For nearly half a century they all but cut contact with other worlds. It was a bad time for us as well. Our economy was wrapped up in their concerns. They also must have engaged in some internal slaughter because the next records we have show their own population to have decreased by six-elevenths.

“It took another century for the Psychlos to become busy again. But they were a very changed people.”

Aha, thought Jonnie. I have the time they began to use those capsules in baby Psychlos’ heads! And why. To protect their teleportation technology and mathematics.

“They had burned all their books,” said Dries. “They had lost any aesthetic arts they had had. You can tell from their dictionaries that the language they had accumulated over the ages ceased to be in full use. They dropped words like compassion or pity and it even seemed they had dropped the term good sense.

“Although we refer to them now as ‘Psychlos,’ that name didn’t come into use until that time. Previously they called themselves after whatever king might chance to be on the imperial throne.

“Anyway, not to bore you, for I see you know something of this, the ensuing centuries were very, very bad for everyone, especially the Psychlos. They built a reputation of being the cruelest, most sadistic oppressors any universe had ever seen.

“But they were in internal trouble. Their population was bursting. They were in economic chaos. They were nine parts in eleven unemployed. The royal house was terrified of revolution and as a matter of fact, experienced, I think, four assassinations of princes—”

“Thank you,” continued Dries. “And in total desperation, they came to the Gredides and actually begged the Selachees for help. They wanted money to hire soldiers and buy arms. But our parliament, the Creditable Body, along with every other race in sixteen universes, wanted nothing to do with them and it looked like outright war. But somebody in the Creditable Body—”

“Thank you. Had the good sense to turn them over to us. We were as big a bank then. The current head of it—”

“Thank you. Brought them to the bargaining table and really got them on the signature line! The bank would handle all economic connections they had with other races, handle all transfers of Psychlo funds, handle all peace conferences. And in return every Selachee would be held inviolate, the Selachee planets and the Gredides System were totally hands off, and the Psychlos would furnish teleportation facilities throughout the universes for the bank. They signed, they got their money, they stabilized.”

Lord Voraz spoke up, “The only two times they ever sought to violate those agreements, they went into a nose-dive splash and they hastily reformed at once.”

“So there,” said Dries Gloton, “you have the whole background of the Galactic Bank. We call it ‘Galactic,’ you know, even though it should be ‘Pan-Galactic,’ covering sixteen universes as it does. But ‘Galactic’ makes customers look on it as their galaxy’s bank. More neighborly, don’t you think?”

What Jonnie thought was that he was dealing with an outfit more powerful than the Psychlos. With the galactic organization that could give orders to monsters and be obeyed. He was very alert. There was trouble here somewhere.

But even with seeming insurmountable odds, the author never-the-less concludes:

“Regardless, it is the story of how mankind could survive, and why.”