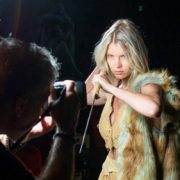 Following the very successful 2016 re-release of Battlefield Earth as a trade paperback and the Audie Award winning full-cast audiobook, both of which went to the #1 spot in the US, we are now preparing for our fall release (September 5th) of the mass market paperback edition. In talking with many of our Battlefield Earth fans both online and in person at conventions, we know they love how the characters come to life in the novel through L. Ron Hubbard’s storytelling ability. So, with that in mind, we assembled some of the principal characters from the book for a photo shoot and we thought you would like a sneak peek.