View cart “Stories from the Golden Age 80-Volume Book Collection” has been added to your cart.

Blacky Lee is a man wanted by nearly every government in Europe, who happens to be the spitting image of the Duke of Aldoria. With nowhere else to hide, he flees to Aldoria and attempts to make the most of his mistaken identity in a startling tale of intrigue, humor, and romance.

Meet Blacky Lee, ruggedly handsome with a quick wit and a roguish charm—with larceny in his heart and a price on his head. A price put there by the German Gestapo. But Blacky’s always got an angle, and this time it’s as audacious as they come. He’ll hide in plain sight, impersonating the crowned head of a Balkan kingdom. He’ll become The Iron Duke.

Can he pull it off? Win the love of a country … and of a beautiful woman? All Blacky has to do is risk everything—and, for once in his life, find a way to do the right thing.

“Filled with realistic sound effects and a classic film noir atmosphere, this inspired and well-polished entertainment will immerse listeners.”—Publishers Weekly 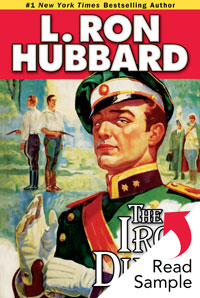 L. Ron Hubbard and Clark Gable were fast friends and fellow adventurers. While Mr. Hubbard was writing for Columbia Pictures in 1937, the studio often called upon him to doctor scripts for Gable—giving him a unique knowledge of the man and inspiration for characters like Blacky Lee.

Antony, Marc: (83–30 BC) a daring general in the army of Julius Caesar who rose to become one of his closest colleagues. After the assassination of Julius Caesar, Antony took most of the treasure from Caesar’s house and took it into his own charge. He also received all the eastern empire provinces and commandeered all the treasure of Asia Minor. Upon his death, his lover, the Egyptian queen Cleopatra, buried him in royal splendor.

Atlas: Atlas Mountains; a mountain range in northwest Africa extending about fifteen hundred miles through Morocco, Algeria and Tunisia including the Rock of Gibraltar. The Atlas range separates the Mediterranean and Atlantic coastlines from the Sahara Desert.

Balkans: the historic and geographic name used to describe a region of southeastern Europe containing the Balkan mountain range. It is bounded on the east by the Black and Aegean Seas and on the south by the Mediterranean Sea.

bat: a binge; a drinking spree.

bravo: a daring villain; one who defies law.

Colt Police Positive .38: a .38-caliber revolver developed by the Colt Firearms Company in answer to a demand for a more powerful version of the .32-caliber Police Positive. First introduced in 1905, these guns were sold to many US police forces and European military units, as well as being made available to the general public.

Croesus: the last king of Lydia, an ancient country encompassing what is now Turkey and bordered by the Aegean Sea, which fell to the Persians in 546 BC. Croesus was noted for his great wealth.

dragoons: a member of a European military unit trained and armed to fight mounted or on foot. The name derives from the dragoon’s primary weapon, a carbine or short musket called the dragon. Dragon carbines were so named because, like the mythical creature, they “breathed fire.”

hussars: a member of a European light cavalry unit, renowned for elegant dress.

longsword: a type of long medieval sword used by knights and men-at-arms from the end of the thirteenth century to the end of the fifteenth. The longsword is commonly held in combat with both hands and is used for striking, cutting and thrusting.

Loyalist: supporter of the government during the Spanish Civil War (1936–1939). The war ended in victory for the insurgents and the founding of a dictatorship under General Francisco Franco.

Strand: a well-known street in London. In the Victorian era, the Strand became a fashionable address where many avant-garde writers and thinkers gathered. It was also the hub of theater and night life that continued into the twentieth century.

Sûreté: (French) the criminal investigation department of the French government.

Wagner: Richard Wagner (1813–1883); German composer and conductor primarily known for his operas or “music dramas” as he called them. Wagner pioneered advances that influenced the development of European classical music. The Magic Fire Music is a musical piece from Wagner’s romantic opera entitled Die Walküre, written in 1856.