View cart “Mystery & Suspense Short Story Collection” has been added to your cart.

Join Bob Clark, an undercover US Treasury agent, who in the course of an investigation at a carnival stumbles upon a series of headless corpses and now must solve the murders. But a local drug ring and four escaped headhunters have other plans.

Decadence and murder found on the dark side of the big city pales in comparison to the freak show found by undercover US narcotics agent Bob Clark in The Carnival of Death.

Clark’s investigation begins with cocaine and leads to cold-blooded murder—the discovery of one, and then another, headless corpse. Who is behind the slaughter? Are the killings tied to the drug traffic? Or is a deeper, darker, and even more sinister conspiracy unfolding in the carnival?

There are plenty of distractions—bright lights and beautiful girls—but Clark better find the murderers of the midway fast. Because the next head that rolls could very well be his own.

Also includes the mystery “The Death Flyer,” in which a man and woman find themselves trapped on a ghost train and bound for a deadly crash … unless they can find a way to derail fate and cheat death—on the fly. 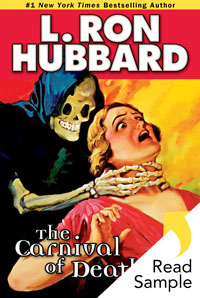 The Carnival of Death Glossary

calks: the spiked plates fixed on the bottoms of shoes to prevent slipping and to preserve the soles.

cribbage: a card game for from two to four players in which the score is kept by inserting small pegs into holes arranged in rows on a small board.

grinder: grind man; usually the ticket seller, who would give a rhythmic and continuous spiel meant to move patrons into the show.

honky-tonk: a style of ragtime music with a heavy beat, usually played on an upright piano with a tinny sound.

lam, take it on the: to break loose and leave suddenly; flee; make a getaway.

motley: consisting of people who are very different from one another and do not seem to belong together.

nailers, tried like: “worked like nailers”; working night and day; working ceaselessly. The term comes from nailers, workers who made nails in eighteenth-century England. Nailers were known for being very industrious and working long hours for very little pay.

phrenologist’s chart: an illustration of the human head, divided into a grid on which each section represents different personality traits, developed around 1800 by a German physician. A phrenologist is someone who claims to be able to read a person’s character by the shape of their skull. Phrenologists were a common circus and carnival attraction in the early 1900s.

receivers: people appointed by a court to manage a business or property that is involved in a legal process such as bankruptcy.

recorder: a survey party’s noteman; the member of a survey team whose job it is to assist surveyors in measuring angles, distances and elevations, and to record the measurements.

rodman: in surveying, a person who carries the leveling rod, a light pole marked with gradations, held upright and read through a surveying instrument.

rolling stock: locomotives, carriages or other vehicles used on a railway.

scatter-gun: a shotgun; a firearm that is a double-barreled smoothbore shoulder weapon for firing shot at short ranges.

shot his cuffs: shoot one’s cuffs; lightly tugging on the coat sleeve, causing the white cuff of the shirt to pop out slightly. This term goes back to the late nineteenth century when the popular cuffs of the time were made of white linen and a thin layer of acetate that could be wiped clean with a damp cloth. One of the showy tricks of the day by a man concerned with his dress and appearance was to shoot his cuffs, making a sudden and showy display of cuffs beyond the jacket sleeves.

shots: estimations of distance or altitude by the use of a surveying instrument.

spieler: an employee who stands before the entrance to a show, as at a carnival, and solicits customers with a loud, usually rehearsed, sales speech.

tender: a car attached to a locomotive and carrying a supply of fuel and water.

“The Streets of Cairo”: song created by Sol Bloom, a show business promoter who was the entertainment director of the Chicago World’s Columbian Exposition of 1893, which celebrated the 400th anniversary of Christopher Columbus’ discovery of the New World. One of its attractions, called Streets of Cairo, included the famous dancer Little Egypt, snake charmers, camel riders and other entertainment.

ties: in railways, the crosswise wooden beams that support the track and keep it in place.

trainman: a member of the operating crew on a train, the method of conveyance for the carnival.

transom: a seat or couch built at the side of a cabin, usually with lockers or drawers underneath.

trestle: a kind of framework of strong posts or piles for supporting a bridge or the track of a railway.

trucks: train wheel unit; a swiveling frame that the wheels and springs are mounted on at either end of a railroad car.