View cart “Stories from the Golden Age 80-Volume Book Collection” has been added to your cart.

Sheriff Kyle of Deadeye, Nevada is a straight shooter who finds treachery in the heart of Washington, DC when a senator is killed and he’s accused of the murder.

Sheriff Kyle of Deadeye, Nevada, is headed east to the nation’s capital and he’s about to discover that the law can be even wilder in the big city than in the Wild West. It’s a fact that hits home when he’s the one accused … of murder.

Kyle’s come to the city to give a report to his senator on the misdeeds of Nevada’s filthy rich copper kings. But before he has a chance, he’s knocked unconscious, later coming to alongside his senator—now dead, with Kyle’s knife embedded in the corpse.

Welcome to Washington D.C., where corruption, intrigue, and murder are all in a day’s work. Kyle’s got no alibi, no memory, and apparently doesn’t have a prayer … unless he can find a way to outwit, outfox and outmaneuver the masters of deception and double-crosses.

Also includes the mysteries “They Killed Him Dead,” in which a respected homicide detective solves a murder several times over, only to be proved wrong again and again, to the amusement of his fellow cops; “The Mad Dog Murder,” the story of a patrol officer who dreams of joining the homicide squad, and finds that the ticket to advancement—and romance—may be a Pekingese dog; and “The Blow Torch Murder,” in which every criminal in town is eager to turn himself in … and the reason is a real killer.

“Listeners will have a genuine sense that they are back in the Golden Age of radio.” —The Strand Magazine 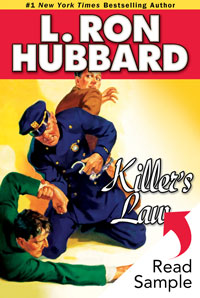 Much like Kyle in Killer’s Law, L. Ron Hubbard was born and bred on the western frontier and made his way east to explore and experience life in Washington, D.C. But unlike the sheriff, Mr. Hubbard enjoyed his time in the capital, where he went to college at Georgetown. He came to know the ins and outs of the city as well as he knew the arroyos and canyons of the west, giving him the kind of insights he needed to write stories like Killer’s Law.

bloodhounding: relentlessly pursuing someone or something.

cat-and-cream: variation of “the cat that got the cream”; someone who looks very pleased with himself or self-satisfied.

Limited: a train line making only a limited number of stops en route.

moll: a female companion of a gangster.

muff: a short tube of fur or warm cloth, into which hands are placed in order to keep them warm.

Old Home Week: a yearly reunion and celebration lasting a week and consisting of existing and previous residents of a community. This tradition dates back to 1901. The first reunion was held for fifty to sixty men who had previously attended a school together and was called the “Old Boys’ Reunion.” From there it grew to include the community and its name changed to “Old Home Week.”

peddler: someone who sells illegal drugs to people.

rogues’ gallery: a set of photographs of known criminals that the police show to crime witnesses for possible identification.

singing soprano: being vocal about informing on someone else or confessing to the police.

snow: cocaine or heroin in the form of a white powder.

trick: shift; the portion of the day scheduled for working.

Vesuvius: a blow torch model manufactured by the American Stove Company, of St. Louis, Missouri. It is named after an active volcano in southwestern Italy, near Naples.