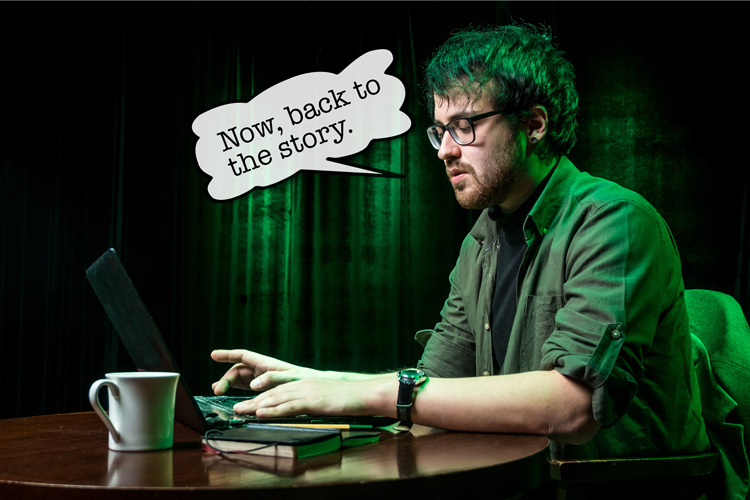 Back to the Story

Is it a tale that intrigues? I’ve read plenty of intriguing stories that don’t deliver on their promise. In fact, I read one yesterday written by a person who has mastered the art of making promises but failing to deliver. I’d hate to be that author’s landlord.

Is it a story whose author is eloquent? I’ve read many stories where the prose sounds gorgeous but the story ends up to be nothing more than stirring drivel.

Do you want a tale that offers profound insights? That’s tough to deliver. Your profound insights might sound simplistic to someone else—or they might go so far over your reader’s head, the reader never even “gets it.” Besides, too many critics confuse popular for profound. For example, if you were to write a story that deals with the theme of the “greed of the political right,” a lot of critics would say that your work was brilliant even if your insights were intellectually sloppy or stale. On the other hand, if you were to write something that was truly profound on a tired old topic like “maintaining faith in yourself in the face of adversity,” those same critics would most likely yawn. Why? Because they confuse trendy for timeless. Ideally, if you’re going to deal with a trendy topic, you handle it in a way that becomes timeless, so that your story becomes the definitive treatment on the topic.

For most people, a “good” story is one that engages them. The author does several things. He or she transports the reader into another time, another place, and another person’s psyche. And then the author takes the reader through a transformative emotional and intellectual experience.

Ultimately, for me at least, that’s what I’m hoping for when I begin to read a tale.

Yet so often writers get bogged down in little things—like trying to cleverly describe a town or a character—that the author will even admit to their audience that they are lost.

For example, in this past week I rejected perhaps fifty entries to a major writing contest for using five simple words: “Now, back to the story.” Have you ever done that? It’s a grave mistake. If you as an author even think that while you’re writing, it should raise red flags.

I reject those stories automatically. Why? There are three problems:

First, the author is addressing the audience. In most cases, that is a mistake. By addressing the reader, you pull them out of the story. It’s like winking at the reader, saying, “You and I both know that this is a story.” It can work at times, in an over-the-top comedy. (Remember the asides in the movie Ferris Beuller’s Day Off? The sit-com “The Office” uses it, too. But it almost never works in a dramatic tale.)

The second problem with using the words “Now, back to the story” is that the author is admitting that he or she has gone astray. It’s like saying, “Okay, I just told you about this lovely little house for two pages, and I know that I’ve vastly over-written the passage, so let’s get back to the story.” The author not only admits that he has given unnecessary information, he is now asking forgiveness.

Instead of begging forgiveness for errors, the writer needs to go back and edit the offending passage.

That is three major storytelling errors in only five words. I’ll reject that story every time. Every other editor will, too.

All I really want is for you to tell me a story. Don’t overindulge in wordiness, don’t underwrite. Don’t get lost and start telling me some other story. Don’t give up and just write a scene.

Keep to the task. Write a story!