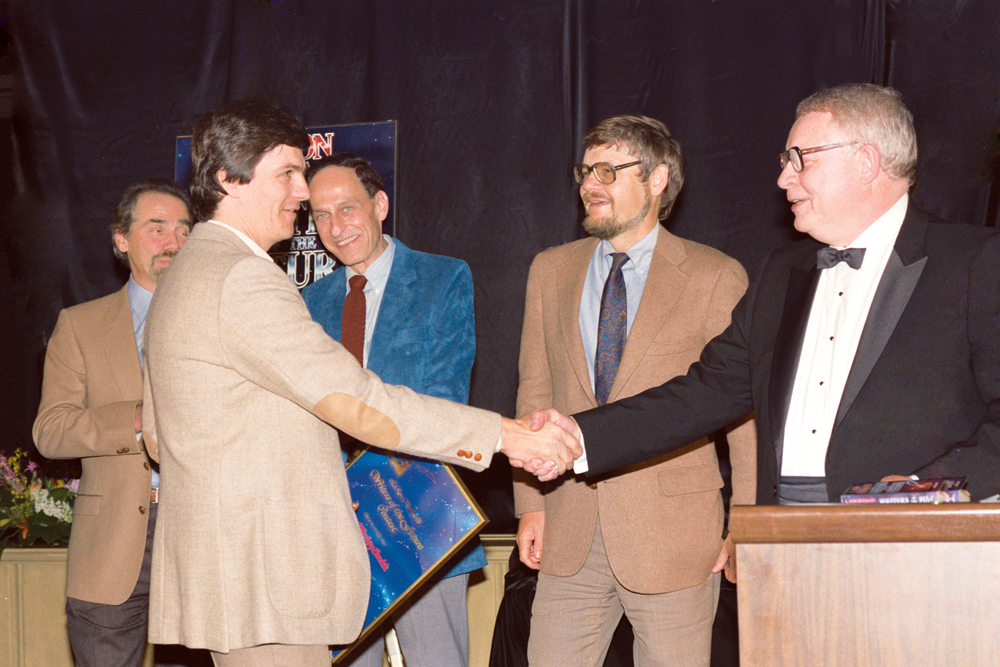 A Bit of History

The first Writers of the Future Awards ceremony took place at the famous Chasen’s restaurant in Beverly Hills, California on February 6, 1985.

“Is seems barely credible now. We had twelve writers—among them Leonard Carpenter, Karen Joy Fowler, Nina Kiriki Hoffman, Dean Wesley Smith, Mary Frances Zambreno and David Zindell, none of whom were household names at all.

At that milestone event, bestselling author Dean Wesley Smith was the first person to cross the stage to accept his award and in his own words: “I don’t think that up until that moment I realized just how big getting into that first volume was. That picture of me on that stage is still treasured on my office wall.

“Since I started selling short stories regularly after that, I was invited back to the very first workshop Algis Budrys put on in Taos, New Mexico. And there I met my wife, writer Kristine Kathryn Rusch. She and I have been together now for twenty-four years. I can pretty much safely say that I wouldn’t have the hundred or so novels published without that workshop and meeting Kris and building a writing life with her.”

Dean has now come full circle and is on the panel of judges for the Writers of the Future Contest along with his wife, Kris. And, as a judge, he helps new writers get their start. In L. Ron Hubbard Presents Writers of the Future Volume 26, Dean wrote an article entitled “Standing Up” providing a general road map of three simple things for all new writers to follow including: “You can’t ever give up.”

Thank you, Dean, for your dedication to the craft and helping new writers in the profession.